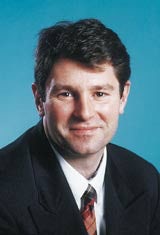 Gowar, who has been with Allied for seven years, was president of global brand development until a reorganisation two months ago, when he was handed a strategic planning role, reporting directly to Martin.

The reorganisation was the second major upheaval in Allied’s marketing division since Martin joined the company from PepsiCo in March 1998, but this is not thought to have influenced Gowar’s decision to leave.

It is believed Gowar has privately disagreed with Martin’s management style for some time and felt he could no longer work with him, although rumours of a rift between the two have been denied by Allied.

The company’s spokesman Mark Hunt says: “I am not aware of any disagreement between Richard and Todd. I think Richard feels he has achieved an awful lot at Allied and it is time to move on.

“He has been responsible for a lot of very valuable and very innovative brand developments. He decided to leave about the time of the reorganisation. His role will not be directly replaced.”

He said Gowar had not indicated his next move but could be planning his own business venture.

In 1997 he was promoted to head of Allied’s European International Brands Group, and was responsible for Ballantine whisky’s success in Europe. At the time of going to press Gowar was not available for comment.