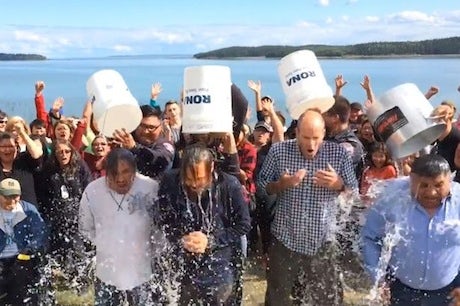 The viral campaign has become popular in both the US and the UK, with hundreds of celebrities including Victoria Beckham and Leonardo di Caprio, taking part. It involves people throwing buckets of iced water over their head and, in most cases, donating to charity.

In the US, that donation has tended to go to the ALS Association, which has raised in excess of $94m dollars. That is more than it raised in the whole of 2013.

In the UK both the Motor Neurone Disease Association (MNDA) and Macmillan have raised more than £3m from donations. However, Macmillan has come in for some criticism for “hijacking” the challenge and has been forced to defend its actions.

The application with the US Patent and Trademark Office, which was spotted by trademark lawyer Erik Pelton, alleges that the ALS Association owns the rights to the phrases “Ice Bucket Challenge” and “ALS Ice Bucket” when used for charitable fundraising. The move means other charities would have to gain its permission to use the phrase in the future and could restrict its use.

However, in a blog post Pelton has questioned the veracity of the claim, pointing out that the phrase is too generic and that as the Association didn’t create it and wasn’t the first to use it, it can’t claim full ownership.

Fiona McBride, trademark attorney at Withers & Rogers, believes it is “highly likely” the application will be go through because it has no direct association with ice bucket challenges in general, although it might succeed by distinguishing the ‘ALS ice bucket challenge’. Then, they would be able to ensure all donations intended for the ALS Association reach them, she adds.