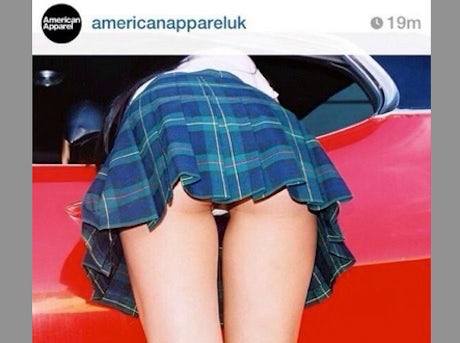 The first of the two images showed a girl bending over to touch the ground with a picture taken from a low angle showing her crotch and bottom. The second featured a girl leaning into a car, again with her bottom visible.

In defence, American Apparel said the pictures were not graphic, explicit or pornographic and the models used were real people that were not portrayed in a manner that was vulnerable, negative or exploitative.

The retailer also claimed the woman used in the ads was 30 years old and that the images only went out on its website and social media, were people had opted in to see images “consistent with the American Apparel branding”.

However, the ASA slammed the ads for their attempt to “imitate voyeuristic ‘up-skirt’ shots” that looked like they had been taken without consent. It said that in the context of a skirt marketed to young woman this had the potential to “normalise a predatory sexual behaviour” and “inappropriately sexualise school-age girls”.

It banned the ads, warning American Apparel to ensure its advertising in future is prepared with a sense of responsibility to consumers and would not cause serious offence.

American Apparel is no stranger to controversy and this is not the first time it has incurred the wrath of the ASA. Last year, the US retailer saw three of its ads banned in the space of four months for using “overtly sexual images”, “sexualising a child” and using “unnecessarily sexual and inappropriate imagery”.