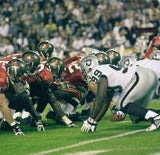 The National Football League (NFL) is to launch a £5m marketing push to generate UK interest in American football before the start of the season in September.

The NFL has made the UK market its international priority and the campaign marks the beginning of a wider five-year plan to make American football a leading UK sport.

The NFL has signed a deal with Five, which will broadcast a prime-time American football show in October. The deal will mark the first time the sport has reached a mainstream terrestrial TV audience in this country.

Print, radio and outdoor advertising will break in the summer. The NFL has signed up commercial partners including Budweiser, Reebok, EA Sports and BT.

NFL vice-president for planning and development Alistair Kirkwood says: “NFL is not an established British brand, so we hope partners can push us into popular culture. Hopefully, we’ll see our players on packs of cereal and beer. We want our stars to be household names within a few years.”

The company has appointed Mediaedge:CIA to its media buying account, but has not decided on a creative agency. Naked and Karmarama were chosen to handle media strategy and creative work for the Superbowl in January.

The NFL also plans to work with its consumer goods partners to launch a range of merchandise, with a line of women’s clothing expected in the summer as part of a partnership with Reebok.