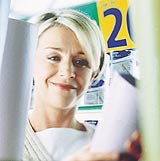 In a surprise move, Homebase has appointed Lowe to work on an advertising project, while retaining incumbent Abbott Mead Vickers.BBDO (AMV), in a pitch for its £18m advertising account.

Lowe, according to a statement issued by the retailer, will work “in the first instance… on a specific standalone project”. However, it is not clear whether this would be a special project or a new campaign for the retailer.

Homebase head of brand marketing Andrea Preducov says: “Because of the broad requirement of our marketing needs and our future strategy, we decided to appoint a roster of advertising agencies to provide the flexibility that we need across all advertising media.”

It had been expected that Homebase would appoint a new agency and axe the long-running Neil and Leslie campaign following the pitch, which originally included TBWA/London. The retailer is thought to have wanted to distance itself from J Sainsbury, which is also handled by AMV, following its buyout from the supermarket giant by Permira, then called Schroder Ventures Europe.

It is thought that Homebase wanted to stick with Morrissey and Ash, a campaign that has been running for more than three years, for the crucial Christmas trading period and while Lowe develops a new campaign idea.

A spokeswoman for Homebase refused to be comment on any agency responsibilities for future advertising work.

After falling Â£28m into the red and letting its key youth audience slip, C4 is being forced to take a hard look at its operations. Amanda Wilkinson reports

A design consultancy has developed the ‘talking poster’. Will it herald a noisy future in which ads start shouting at people in the streets? asks Iain Murray