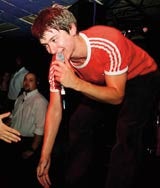 The addition of ‘engagement marketing’ to its armoury has enabled the public relations industry to be taken more seriously by clients as a valuable marketing resource. By Jo-Anne Flack

The Arctic Monkeys may have been underwhelmed by their triple success at the NME awards last month, but the fact that their first album has turned out to be the fastest-selling debut of all time without the backing of any traditional marketing methods must be worrying for those who rely on the blanket approach when it comes to promoting new bands.

The Sheffield band’s success epitomises the new wave of “engagement marketing” that is claimed to be behind the success of other brands like Google, Amazon and AOL – brands that have spent little money above-the-line but have high levels of brand awareness.

The marketing industry continually churns out buzz words or phrases to encapsulate the latest thinking to revolutionise the sector – integration, one-to-one, experiential, etc. And with each new phrase comes the question as to which discipline is best suited to lead the revolution.

Unusually, this time it is the public relations (PR) industry stepping forward, not only claiming the ability to push forward the boundaries of engagement marketing, but also claiming it is already established as a weapon in its armoury.

Could it be that, finally, the PR sector will be able to cast off its reputation as mere overseers of media relations and publicity, and really be taken seriously by clients as a part of the marketing mix?

Buffalo Communications managing director Kerry Hallard says: “PR has always been about relating to the public, and as the public becomes increasingly empowered, the PR community will prove more nimble and able to pick up on what consumers are thinking and saying.” As an example of this, Hallard says that when internet chat rooms were still quite new, Buffalo Communications had a strategy of “professional lurking”, leading to staff joining chat rooms to investigate the issues that were being talked about and what was being said.

Hallard says the explosion of blogs and online forums has propelled engagement marketing into the business-to-consumer arena.

Cohn &amp; Wolfe London chairman David McClaren says the very nature of the PR business will enable it to embrace engagement marketing in a way that other disciplines can’t.

Engagement marketing is not an ill-defined discipline, or one of questionable impact, according to McClaren: “Clients will increase their levels of investment in engagement marketing if it produces robust data, and there is no reason why it shouldn’t. It ought to be highly trackable – in fact it is the most trackable of any ‘encounter’ because the group of people communicated to is known.”

But is engagement marketing a discipline limited in terms of the clients it serves and the target audience it seeks to influence?

Midnight Communications head of lifestyle and events Rebecca Whitehead cites a campaign the agency carried out for the New Scientist that shows the power of engagement marketing, specifically through the medium of blogging.

Whitehead says: “We decided to harness the power of the blog and launch an online web log to get people talking about the survey and the results. The website was completely overpopulated from that point on.”

The radical shake-up in the way people communicate has empowered consumers in a way that could not have been predicted even five years ago. Engagement marketing is about big brands realising that consumers don’t have to listen to their messages anymore.

As Philip Sheldrake, partner and analyst at Fuse PR, puts it: “If I don’t want to see it, hear it, or read it, I don’t. Consumers can interact and produce content themselves, rather than just consume.”

When brands talk about the growing power of consumers, it is no longer just recognising that consumers hold the purse strings. The emergence of websites like Tescopoly – the forum for people protesting against Tesco’s relentless expansion plans – proves that consumers now not only have the will, but the medium, to fight back.

This is engagement marketing at its best, depending on which side of the fence you are on. These may not be the kinds of people that Tesco originally sought to engage with, but this scenario points to how brands and consumers can communicate with each other in the future – without an advertising slogan or campaign to be seen anywhere.