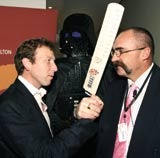 As the Diary writes, the Australian cricket team are being most un-Australian, in that they are losing a few games against England.

There are a few theories flying round as to why this is so: an ageing Aussie team; Steve Harmison rediscovering his form; the fact that Jason Gillespie couldn’t hit the stumps with a beach ball. However, they’re all wrong. The secret of the all-conquering Australian teams of the past 15 years was its splendid ‘taches, and the present team is sadly lacking in facial hair. Indeed, if it weren’t for Gillespie’s “118 look” and Glenn McGrath’s 1980s-style blonde streaks, this would be the dullest-looking Aussie team to tour the UK since the days of Don Bradman.

A reminder of the Aussies’ glory era emanated from the offices of PR company Hill &amp; Knowlton in Soho Square, which hosted an Ashes debate attended by legendary Aussie fast bowler Merv “the Swerve” Hughes. The man whose moustache ends in a different postcode to his nostrils was rekindling his rivalry with former England captain Michael Atherton.

As Atherton had a few problems facing Hughes on the pitch, Hill &amp; Knowlton brought in a bit of help for him, in the form of well-known cricket authority and Death Star opening batsman, Darth Vader. Vader’s advice for the England team was invaluable. “May the fours be with you,” he said.