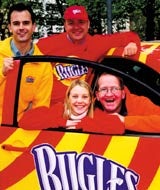 It’s a funny old world. One moment you’re on the cover of every national newspaper, the next you’re humiliating yourself in Leicester Square promoting crisps.

Such was the jam Eddie “The Eagle” Edwards found himself in when he was signed up to promote Golden Wonder’s Bugles brand.

The former Olympic ski-jumper – famous for flying only slightly further than the average elephant – rolled down a giant slide in a large inflatable ball. And that was supposed to make us eat crisps.