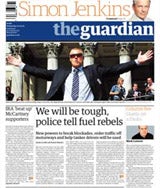 Will the Berliner Guardian turn the page on falling circulation?

The Guardian’s Berliner format has finally hit the newsstands after a two-year wait. In the time it took to roll out the Berliner, readers have readily embraced change and innovation elsewhere in the market, leaving editor Alan Rusbridger’s title, used to sales of 400,000, struggling with an August 2005 circulation figure of 341,000 including bulks – the newspaper’s lowest since 1978.

It is generally acknowledged that many of those lost readers accounted for The Independent’s sudden circulation rise after it became the first broadsheet to change size in 2003. Sales of the Indy have fallen by 1.7 per cent to about 265,000 since August 2004, but remain about 40,000 higher than sales on its final day as a broadsheet.

The Times, too, can claim its downsizing was a success: its circulation was 680,000 in August – 60,000 copies higher than just before it went compact. And executives at the paper’s owner News International can take heart that a 4.8 per cent year-on-year rise suggests the novelty of the change has not yet worn off.

Though nobody at The Guardian will be drawn on sales and circulation targets, initial industry reactions to the Berliner suggest the smaller size will lift the publication’s flagging fortunes. But predictions of circulation hikes are tempered by realism.

Lorna Tilbian, media analyst at Numis Securities, says: “It’s a big task to achieve anything more than returning to the ABC figures The Guardian enjoyed before the Indy changed size. To expect all its old readers plus some new ones is unrealistic, but I think it will quickly match previous highs.”

Andrew Mullins, general manager of The Times and The Sunday Times, agrees and says: “As prime target, The Independent could be in trouble. The Guardian’s new front page is neat but very quiet. Some of the Independent’s adopted readers may choose to stay with a newspaper that spoon-feeds them the front cover, with lots of analysis.”

The Independent commercial director Simon Barnes concurs that his newspaper’s front page is a powerful marketing tool. But he says: “The Berliner is great for the market. But we welcome the competition and hope people sample the new Guardian. We have faith that readers will find they want to stay with us.”

Media buyers and advertisers, meanwhile, are extremely positive about the new product. One buyer says: “The Guardian has lots on offer to draw back its readers. It looks great and is easy to navigate, has colour on every page, which will appeal to consumers and advertisers alike, and the new standalone sports section is a winner.”

Carat head of press Dominic Williams says he is “very impressed” with the Berliner, but points out that direct-response advertisers that mostly advertise in mono – ads are about 35 per cent cheaper than colour rates – are concerned they will be driven out. “Some advertisers are worried about the use of full colour. Direct-response clients such as insurance company Esure, Dell and British Gas could account for as much as 30 per cent of The Guardian’s revenue, so that issue needs resolving.”

The Guardian marketing director Marc Sands says the Berliner will not refuse mono advertising, but claims the new format re-establishes The Guardian’s reputation for innovation. Sands states: “There is nothing innovative about going tabloid. In deciding to change our masthead, our advertising, colour and size to something genuinely new, we’ve undertaken a process which took more thought, and will consequently prove more robust.”

French Connection, the fashion retailer, has reported an eight per cent decrease in sales for the six months to July 31. It also saw profits plummet to &£5.1m, compared to &£16.2m for the same period last year.

Now scandalous behaviour is the norm, how are poor tabloid hacks to whip up outrage? Thank goodness our new universities are rising to the challenge Some time ago this column scorned media studies courses, the gist of its case being that they were neither academic nor vocational, since few of those graduating could expect to […]

Levi’s has unveiled its latest television campaign for the 501 anti-fit range. The campaign, produced by Bartle Bogle Hegarty, is due to break later this month and marks a return to the American Dream-style ads for which the company was famous in the 1980s and 1990s. Shot in a New Jersey suburb, the ads feature […]