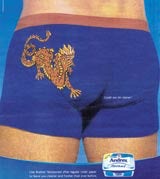 A print campaign for the relaunch of Andrex Moistened toilet tissue has prompted several complaints to the Advertising Standards Authority (ASA).

The ads show a close-up of a man’s bottom clad in a pair of underpants emblazoned with a Chinese dragon, which appears to be backing away from the model’s rear. The image is accompanied by the slogan “Could you be cleaner?” The campaign was created by JWT.

The ASA has also received 78 complaints about another JWT-created ad, this time a television spot for car manufacturer Mazda, which shows mannequins becoming sexually aroused as they are taken for a drive.

The ASA has cleared a Ryanair ad, which was run in The Daily Telegraph and The Independent in the wake of the London bomb attacks on July 7 and attracted 319 complaints.

The complainants argued that the ad tried to cash in on the bombings and was disrespectful to those who died in the Second World War. However, the ASA has ruled that the execution fitted in with the defiant reaction to the bombings and would not have caused widespread offence.