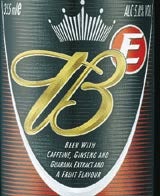 Anheuser-Busch is launching a caffeinated beer called BE (“B-to-the-E”) in the UK next month, as it seeks to lure young consumers who drink flavoured and mixed drinks.

The launch is thought to be in response to the rising popularity of energy drinks such as Red Bull. The new premium-strength bottled beer contains caffeine, guarana, ginseng and a fruit flavour. The beer was introduced in the US in January.

The launch of the five per cent ABV (alcohol-by- volume) beer, on July 18, will not be initially supported by an advertising campaign. Marketing support will include sampling, point of purchase, sponsorship of dance events and PR.

Budweiser UK marketing director Jim Gorczyca says: “BE has generated huge excitement in bars and clubs throughout the US. There is no other product like BE – a premium-strength beer with extra ingredients that has a taste that appeals to both men and women.

“Its flavour is reminiscent of beer, with a raspberry, blackberry and cherry aroma that delivers a sweet taste.”

An industry expert says the uptake of Michelob Ultra is not showing much promise either and he does not expect the brand to last much longer. “I don’t think that Michelob Ultra will be around this time next year,” he adds.