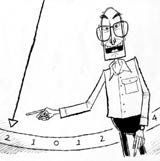 Animated caricatures of leading BBC presenters will be used to trail the corporation’s news coverage of the General Election. Line drawings of John Humphrys, Huw Edwards, Peter Snow, Fiona Bruce, David Dimbleby and Andrew Marr will feature in the television trailers, developed by DFGW and Passion Films. Each of the four trailers will present a different issue and draw on the British satirical tradition of using cartoons and caricatures to demystify politics. They were revealed yesterday (Tuesday) – the same day as the Prime Minister called the General Election, which will take place on May 5. Head of BBC News marketing Fiona Eastwood says: ‘Research told us that people weren’t connecting with party politics as strongly as they once did, but there was still a large amount of interest in fundamental political issues.’

Jamie Oliver could soon be appearing in sponsored television-style cookery programmes shown on mobile phones. The programmes are being marketed to potential sponsors under the title Jamie Oliver’s Three Minute Recipes. It has not been decided whether the series, which will be made available on third-generation mobile phones, will carry the Sainsbury’s logo. The recipes […]