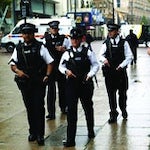 The ad encouraged listeners to call the service if they had suspicions over “the man at the end of the street” who “likes to keep himself to himself”, “doesn’t have a bank card” and “keeps his curtains drawn because his house is on a bus route”.

“This may mean nothing, but together it could all add up to you having suspicions,” the ad continued.

Ten listeners complained the ad was offensive because it encouraged people to report law-abiding citizens who acted in the way described.

The Advertising Standards Authority agrees that innocent people displaying such behaviour could find the ad offensive because it suggested their actions were suspicious.

The Metropolitan Police, responding on behalf of The Association of Chief Police Officers, claims the behaviour described in the ad is based on trends identified by police and had been amongst evidence given in court at recent terrorism trials.

It adds the spot “addressed the issue that terrorists lived within communities and sometimes what appeared to be an insignificant behaviour could potentially be linked to terrorist activities”.

Separate complaints that the ad could lead to harassment and that it unduly spread fear were not upheld.

The ASA ruled the ad must not appear again in its current form.