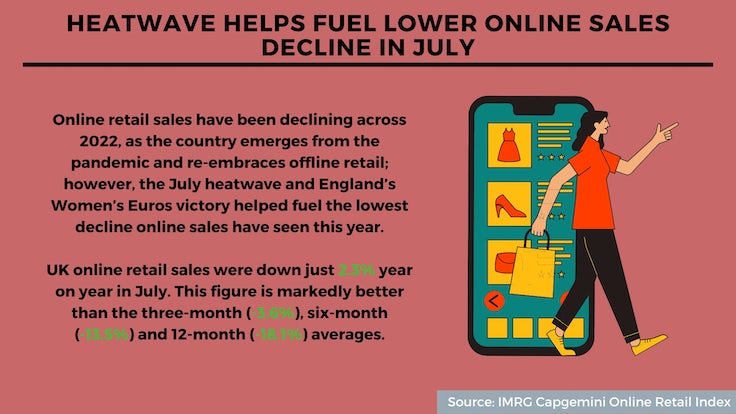 Online retail sales have been declining across 2022, as the country emerges from the pandemic and re-embraces offline retail; however, the July heatwave and England’s Women’s Euros victory helped fuel the lowest decline online sales have seen this year.

While three of the four weeks in July saw negative growth, the week commencing 10 July, the week leading up to the hottest day, was up 5.8% year on year, only the second time any week has been positive this year.

Categories driving this positive week were electricals (as people invested in items like fans amid the hot weather), clothing and gardening items. For the month as a whole however, only clothing (+11.9%) and garden (+3.3%) recorded positive growth.

While July’s figures represent a better picture of online retail sales in the UK, IMRG’s strategy and insight director Andy Mulcahy is not optimistic about the months ahead.

“It seems remarkable that it took the hottest day in British history and England actually winning a football tournament to produce only slightly negative growth – it does make you wonder what would need to happen for it to be positive. Black Friday and peak season trading looks like it might be very difficult this year, given the Bank of England has increased interest rates and inflation is expected to reach 13% by then,” he says. 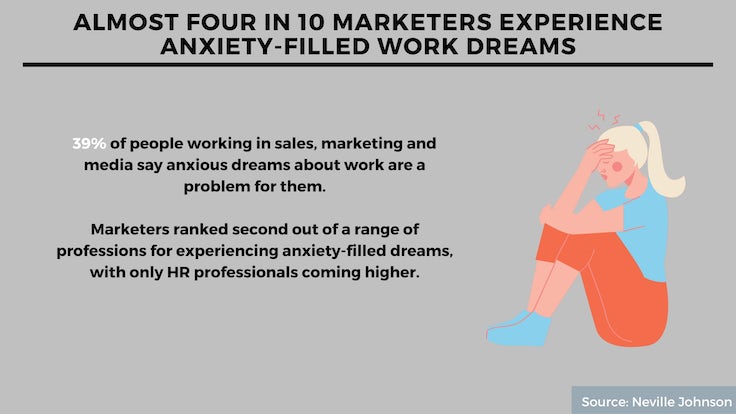 More than two-thirds (39%) of people working in sales, marketing and media say anxious dreams about work are a problem for them, according to a study looking into the relationship between our dreams and work.

Marketers ranked second out of a range of professions for experiencing anxiety-filled dreams, with only HR professionals coming higher.

The survey of 2,205 UK professionals finds that, overall, around eight in 10 (78%) people have dreamt about work. Almost half (49%) admit they dream about work at least once a month.

Men tend to dream more positively about work than women, with more than a quarter (27%) saying their dreams about work are mainly positive, while only 16% of women agree.

Work-related dreams are most likely to focus on an excessive workload, with the research finding that higher earners are more likely to have these kinds of dreams. Other themes of the work-related dreams included being late, random or unexplained work events and getting stuck in a lift or corridor at work.

It’s not all bad news though, with half of the workers surveyed saying they had experienced a “lightbulb moment” during a dream. One in five even say this has happened to them on numerous occasions.

While marketers rank second in experiencing issues with anxious dreams, the profession is only the eleventh most likely to dream about work overall. 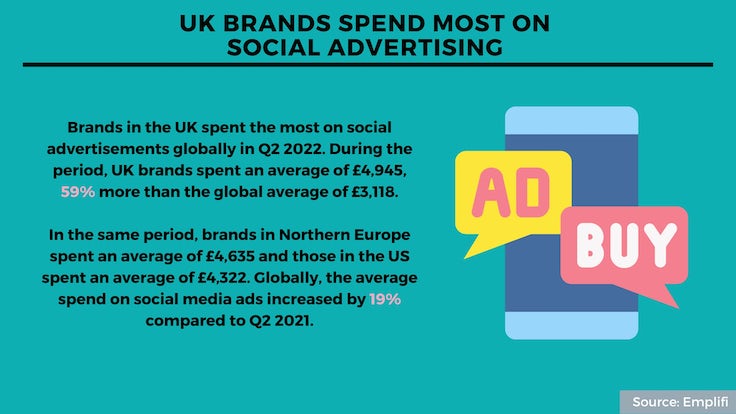 Despite increased investment from the UK in particular, brands may struggle with the ROI on this spend, as the report suggests that click-through rates are at their lowest level year on year, at 0.93% in Q2 2022, down 15% since Q2 2021. Median cost-per-click also rose, up 7% from Q1 2022.

The research analysed 330 brands’ sister TikTok and Instagram accounts from January to June 2022 and found brands post more often on Instagram (68%) than on TikTok (32%) in relative posting frequency. It also finds that while reach and interactions are higher on Instagram, video content had greater engagement on TikTok, at 58% versus 42%.

Half of UK market research firms predict growth for the sector 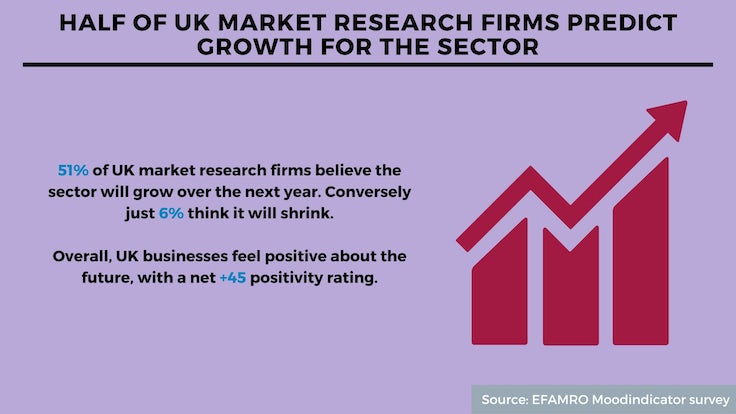 Just over half (51%) of UK market research firms believe the sector will grow over the next year, according to the latest EFAMRO Moodindicator survey. Conversely just 6% think it will shrink.

The study, which is based on a sample of 249 market research firms across 11 European countries during Q2, also finds nearly three-quarters (71%) of UK firms believe research revenues will increase over the coming year. When looking across all countries surveyed this figure drops to 64% but this is still significantly higher that it has been. In Q4 2021 when the survey was last carried out just 25% of market research firms expected their revenues to rise.

Overall, UK businesses feel positive about the future, with a net +45 positivity rating.

Jane Frost, CEO of the Market Research Society, describes the positive results in the latest survey as “encouraging”, and says the UK’s research sector has demonstrated “exceptional resilience and remains strong”, despite the unrest of the past couple of years.

“As much as anything it’s a testament to the importance of research in so many aspects of life. Without the insight and direction that comes from research, the correct decisions simply cannot be made, especially in the face of major challenges like the cost-of-living crisis and levelling up,” she says.

“Though I am pleased by the positive results of the survey, it is clear that there is still some concern, and rising inflation may require difficult budgetary choices. However, it’s vital we continue laying the groundwork for long-term growth including by encouraging talented young individuals to choose market research as a career.”

The latest IPA Bellwether shows a slow down in market research budgets, which saw a net decline of -6.5% in the second quarter of 2022, down from -3.5% in the first quarter. Market research budgets had been rising towards the back end of 2021, with a net balance of 0.7% of companies increasing budgets in Q3 and 7% in Q4. 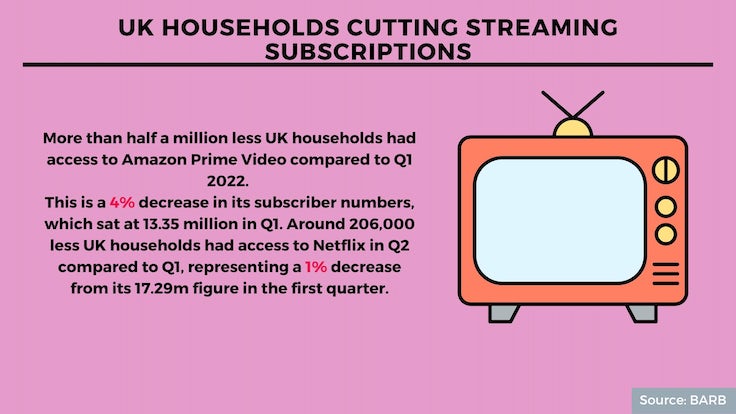 Netflix and Amazon Prime Video both saw hundreds of thousands of households cut their subscriptions last quarter, according to figures from BARB’s Establishment Survey.

The survey finds that in Q2 2022, more than half a million less UK households had access to Amazon Prime Video compared to Q1 2022. This is a 4% decrease in its subscriber numbers, which sat at 13.35 million in Q1. Around 206,000 less UK households had access to Netflix in Q2 compared to Q1, representing a 1% decrease from its 17.29m figure in the first quarter.

Overall, the number of UK households with access to at least one subscription video-on-demand (SVOD) service declined to 19.19 million from 19.57 million in Q1 2022. This represents a 2% decrease.

While Netflix and Amazon Prime Video remain the most subscribed-to services in the UK, with 60% and 45% of households subscribed respectively- these SVOD services both saw declines in the quarter where rivals saw growth.

Disney+ and Apple TV+ both experienced small quarterly gains, bucking the trend for the period. 91,000 more UK households had access to Disney+ in Q2 2022, representing growth of just over 1% for the SVOD service. Apple TV+ grew its UK households by 3% from 1.57 million in Q1, to 1.61 million.

BARB’s chief executive Justin Sampson speculates that the overall decline in subscriptions has been prompted by increased costs elsewhere.

“We don’t ask households why they choose to add or drop subscriptions, although the sharp increase in energy prices in March/April must have been a catalyst for people to review all their monthly outgoings. The numbers we report today show SVOD services aren’t immune as households work hard to make ends meet,” he says. 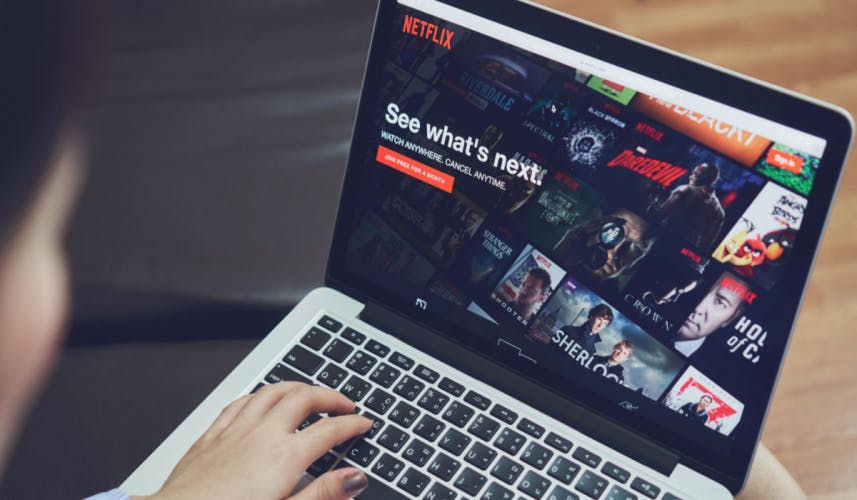 Data suggests creating assets specifically for each channel is more effective than repurposing them, so podcasts and streaming platforms shouldn’t look to radio and TV for their ad formats.

The founder of AB InBev’s in-house agency draftLine believes the media industry will continue to make a “directional shift” towards attention as a primary trading metric.