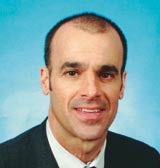 The Wall Street Journal (WSJ) Europe has appointed Phil Kramer, AOL UK’s director of sales for AOL Time Warner, as advertising director, with a brief to poach revenue from competitors such as the Financial Times.

Kramer has worked for the WSJ before, as associate regional sales manager of its Western region, based in San Francisco.

Kramer is charged with developing new advertising strategies to increase the WSJ Europe’s market share and to co-ordinate global ad sales initiatives. The newspaper reported first-quarter advertising volumes up 22.1 per cent on the same period in 2002.

The Financial Times was relaunched last month, with new sections and a glossy Weekend FT magazine. Owner Pearson has put &£3m into marketing the newspaper, and admits that the FT’s advertising revenues fell by 18 per cent year on year, in the year to the beginning of May.

Guardian Media Group has refused to confirm or deny speculation that it is considering making a bid for Capital Radio Group. Guardian Media says it is looking at a number of possibilities.

UEFA is to promote Lars-Christer Olsson, director of marketing, to the position of chief executive. He will replace the retiring Gerhard Aigner in December. No decision has been made on Olsson’s replacement.