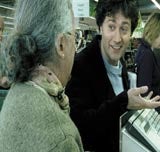 AOL has launched a &£20m multi-media advertising campaign to support the UK launch of AOL 9.0. The campaign, which launches on April 5, is the first work for AOL by agency Grey London, which took over the account in February after winning the business last autumn (MW October 20, 2003). The campaign aims to move the brand on from its position as the provider for families and new users of the internet to reflect the sophistication of today’s internet consumers. The TV and print campaign will introduce four new characters who use AOL to improve their lives. The first wave of ads will be based around Steve, who finds life too slow but fulfils his desire for speed with his AOL broadband. Media is bought by Vizeum.