With brands of the stature of Coca-Cola, Burberry and Google now professing to be “mobile first” the awakening to the rising tide of such devices is certainly to be lauded. In fact pretty much all brands will pay lip service to the importance of mobile, but I can’t help think there’s an element of “me too” with all of this.

After all, who’s going to tell someone like Google that they don’t know what they’re talking about when it comes to consumer habits on the word wide web? The fact that mobile is occupying the minds of many marketers is certainly true but why I can’t help but wonder if their priorities are in the right order.

Many agency contacts have told me that when trying to compose a clients’ comprehensive mobile strategy the question of “what are we going to do about apps?” comes up all too often and early in the conversation. And as anybody who works in the world of client services will tell you, it’s hard to change a client’s mind once they have it set on something.

However, the folly in taking care of your mobile audience by simply launching an app is demonstrated by a piece of research from the Direct Marketing Association (DMA) we covered yesterday which reveals that search tops app usage on smartphones.

In the study, the DMA revealed that mobile users prefer using search over branded apps for discovering new information on products and services with 40 per cent of using a search engine to do so. This is compared to 37 per cent who use their apps for the same purpose. The difference is small but significant.

This is made even more alarming when you consider that in October the IAB published a study claiming that just 37 of the top 100 advertisers have mobile-optimised sites – a recipe for high drop off rates if ever there was one.

Plus I’d be willing to put my neck on the line and say that many more of the top 100 advertisers have branded apps but no mobile website, the anecdotal evidence I’ve heard would certainly suggest that.

No matter how we try to rationalise the reasons that most big brands don’t have mobile optimised sites, with many opting for ephemeral apps instead, the fact is most of them are now behind the curve.

Consumer adoption of mobile media has caught most of us unawares. But that doesn’t mean brands should go for the easy option and launch an app to placate their CMO instead.

A well rounded mobile strategy developed to cater for consumers’ needs will bring better return in the long-run than a shiny new app. 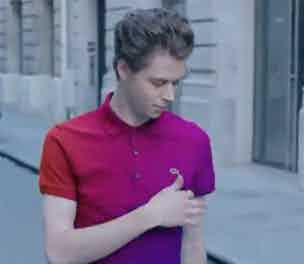 Lacoste has launched an online video that envisions a future where its polo shirts contain futuristic technology to mark the 80th anniversary of the clothing item.