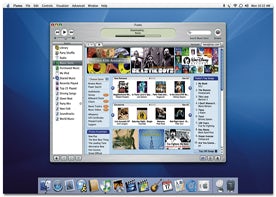 Apple Computer is expected to steal a march on its bitter rival Microsoft this week, after BSkyB became the second company forced to suspend a movie download service because of problems with Microsoft’s software.

Apple is launching in the competitive movie download market and is likely to use Microsoft’s problems as an opportunity to establish its own movie service.

Ahead of yesterday’s announcement, it suspended its iTunes online store and replaced it with a promise of an updated service and the tagline “It’s showtime”.

Disney and its other studios Miramax Films, Touchstone  Pictures and Pixar have signed up to supply content, which includes over 75 movies. The new service will only be available in the US until next year.

Sky says its Sky by Broadband service will remain down until Microsoft fixes problems with its digital rights management software.

Sky says that until this has been done, it cannot be sure people will not be able to make illegal copies of films.

A BSkyB spokesman says: “We are being a responsible distributor that seeks to protect the interests of content-providers – such as studios – and felt that it was the right thing to do.”

A number of other services rely on Microsoft’s platform, including BT, Lovefilm,  and Amazon Unbox.

Last week, Lovefilm suspended downloads of movies from Icon Film for 24 hours due to the same problem. Lovefilm has since agreed with all its studio partners to maintain the service.

Lovefilm marketing director Simon Morris says any film previously downloaded “is exposed” to the problem. “It applies to any content that’s been downloaded historically,” he says.

Morris adds the problem could also affect music downloads on other sites.

Marcus Matthias, Microsoft’s senior product manager, Windows client division, promises an update is on the way and that the problem will be rectified.

“We are working on a fix and have alerted our content provider customers,” he says.

Canadian soya brand So Good is understood to have appointed Tunbridge Wells-based agency Jam Marketing to handle its £4m advertising account. It is thought the agency won the business following a competitive pitch. The appointment comes ahead of a major push in the UK market. So Good is available in some supermarkets and health food […]

The new TV ad campaign for Lynx Dry – in which a man literally showers women with sweat every time he lifts his arms – has triggered a series of complaints to the Advertising Standards Authority, which is considering whether to launch a full investigation. While most of the complaints are from viewers who found […]

Chrysalis Radio is launching a new on-air identity for its Heart brand, starting with the flagship London station. It claims that this is the biggest change in the station’s “sound” since it launched in 1995. The on-air package includes new “music beds”, or background music and vocal idents, to replace the traditional jingles, and will […]