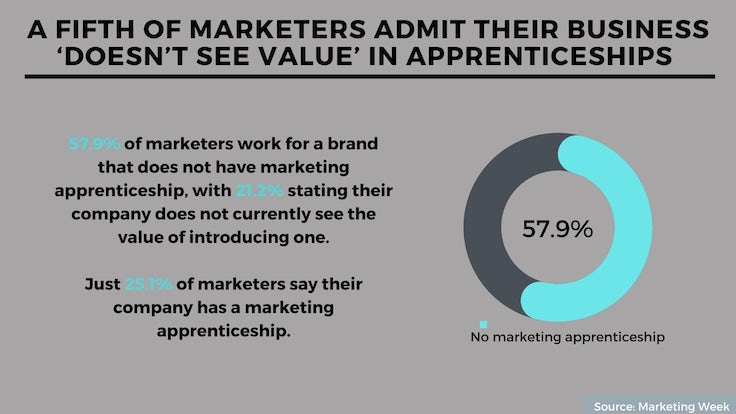 More than half (57.9%) of the 4,463 marketers surveyed for Marketing Week’s 2022 Career and Salary Survey work for a brand with no marketing apprenticeship, with more than a fifth (21.2%) stating their company does not currently see the value in introducing one.

A further 10.4% say it is too complicated to develop a programme, while 6.6% cannot get buy-in at the highest level for such an initiative.

Marketers list numerous reasons why their brand does not run a marketing apprenticeship scheme. These range from the fact their business is too small to the fact there is no budget to develop a programme or because they already have a graduate scheme in place.

Currently, just 25.1% of the marketers surveyed say their company has a marketing apprenticeship, while 17% aren’t sure whether their business does or not. 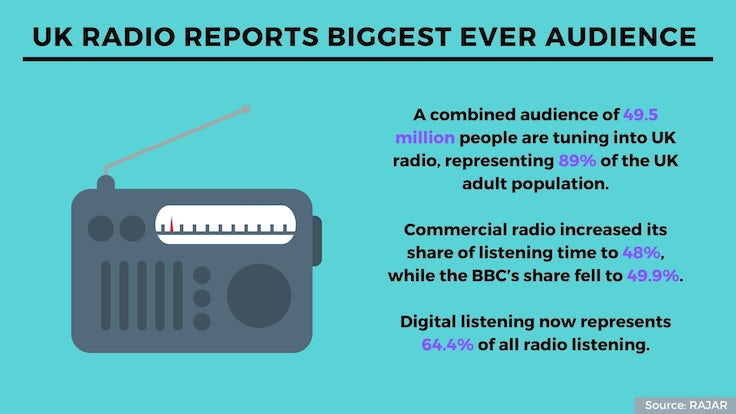 A combined audience of 49.5 million people are tuning into UK radio, equalling the highest total audience ever recorded in the previous quarter and representing 89% of the UK adult population.

Commercial radio increased its share of listening time to 48%, up from 47.1% during the third quarter, while the BBC’s share fell to 49.9% from 50.9%. The total commercial radio audience is now 36.77 million, just shy of its biggest ever audience of 36.8 million last quarter.

Total digital listening now represents 64.4% of all radio listening. This is mainly accounted for by DAB radio (42.5%), while online (including smart speakers) now represents 16.9% of all listening time. The remaining 5.1% is listening on digital TV.

Global increased the audience across its network to 25.8 million weekly listeners, growing the broadcaster’s share of the commercial radio market to 24%.

Global-owned radio brand Heart notched up its highest ever listening figures during the period – hitting 10.3 million – up 250,000 over the three-month period. Meanwhile, talk radio brand LBC reached 3.2 million weekly listeners, the biggest listening base in the channel’s history.

The data shows Bauer Media reached 20.6 million listeners across its stations, boasting more than 75% of listening via a digital device ahead of an industry average of 65%. 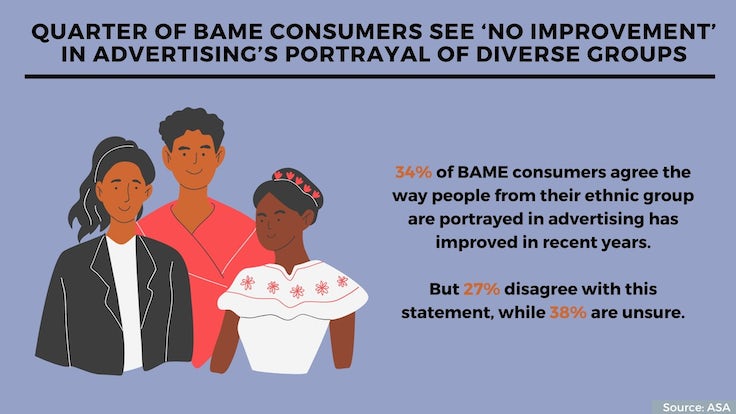 Just 34% of BAME consumers agree the way people from their ethnic group are portrayed in advertising has improved in recent years.

Of the 1,000 BAME participants included in the Advertising Standards Authority study, 27% say they disagree with the statement, while 38% are unsure.

The ASA conducted 22 focus groups and a survey of more than 2,000 people for its study, which forms part of a “major” project looking at the extent to which portrayal of race or ethnicity in UK ads might give rise to harm or serious offence.

The results reveal BAME groups are almost three times more likely to feel under-represented or not represented at all in advertising (66%) compared to white consumers (23%).

Meanwhile, around half of BAME participants say when they are represented in ads, they are not portrayed accurately, rising from 49% among men to 57% among women. Of those, a similar proportion feel people from their ethnic group are negatively stereotyped.

Shoppers return to pre-pandemic routines as focus on price rises 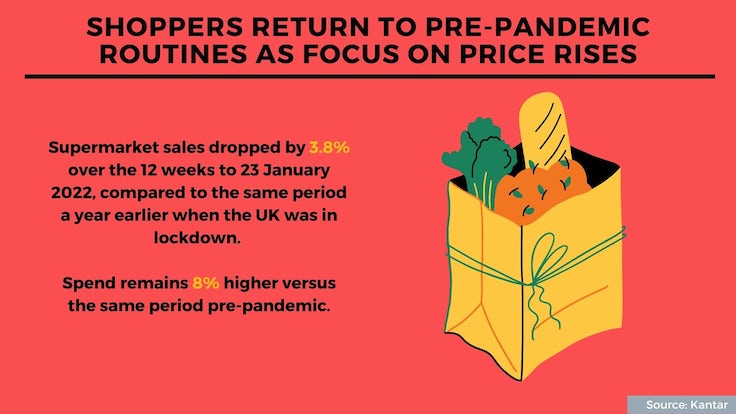 Supermarket sales dropped by 3.8% over the 12 weeks to 23 January 2022, compared to the same period a year earlier when the UK was in lockdown. Spend does remain 8% higher versus the same period pre-pandemic, though.

Like-for-like grocery inflation stands at 3.8% for the past four weeks, a 0.3 percentage point increase on December. Taken over the course of a 12-month period, this rise in prices could add an extra £180 to the average household’s annual grocery bill, according to Fraser McKevitt, head of retail and consumer insight at Kantar.

“We’re now likely to see shoppers striving to keep costs down by searching for cheaper products and promotions. Supermarkets that can offer the best value stand to win the biggest slice of spend,” he adds.

Only three grocers recorded growth over the 12-week period compared to 2021, with Aldi and Lidl recording 1.1% and 1.2%, respectively, while Ocado grew by 2.3%. All retailers increased sales on a two-year basis.

Tesco and Waitrose performed ahead of the market over the past 12 weeks and increased share. Tesco’s share increased from 27.3% last year to 27.9%, marking a full year of market share gains for the retailer.

Waitrose saw the greatest footfall increase of any supermarket, helping its share increase by 0.1 percentage points to 5.1%.

Online orders accounted for 12.5% of all grocery spend, which is down by 15% year on year when the UK was in lockdown. It is almost double the pre-pandemic level, though. 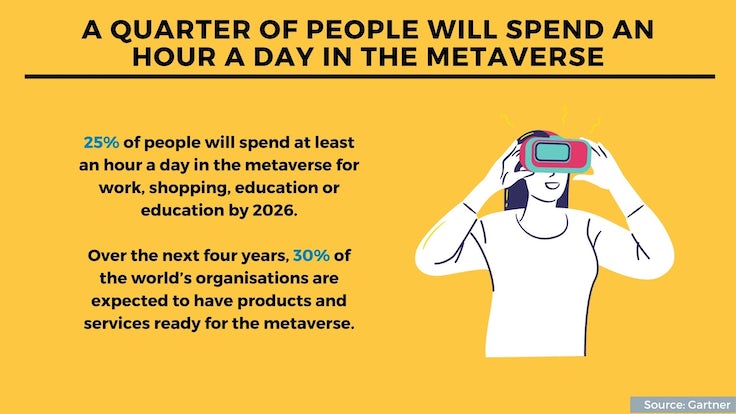 A quarter (25%) of people will spend at least an hour a day in the metaverse for work, shopping, education or education by 2026, according to Gartner.

Over the next four years, it predicts 30% of the world’s organisations will have products and services ready for the metaverse. However, given the adoption of metaverse technologies is nascent and fragmented, Gartner cautions against companies investing heavily in a specific metaverse at this stage.

It expects the metaverse will impact “every business” that consumers interact with every day and for it to have its own virtual economy enabled by digital currencies and nonfungible tokens (NFTs).

“Vendors are already building ways for users to replicate their lives in digital worlds,” said Marty Resnick, research vice president at Gartner. “From attending virtual classrooms to buying digital land and constructing virtual homes, these activities are currently being conducted in separate environments. Eventually, they will take place in a single environment – the metaverse – with multiple destinations across technologies and experiences.”