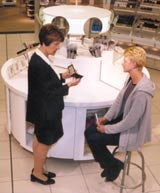 Women’s dressing tables could be in for a major shake-up as health and safety crusaders call for clearer labelling on products that promise to make consumers look more attractive and beautiful.

With the UK’s cosmetic and skincare industry valued at £2.6bn in 2001 (Mintel) – up 37 per cent on 1997’s figures – it is no surprise that those cosmetics manufacturers that are under fire claim they conduct rigorous safety tests on products and their ingredients.

The Women’s Environmental Network (WEN), the women’s health charity, has launched the “end the cosmetics cover-up” campaign, which is aimed at “uncovering” the truth as to whether some synthetic chemicals contribute to health problems and environmental harm (MW last week). It is calling for clearer labelling, using “plain” language and symbols to help consumers learn which ingredients are present in beauty products. For instance, on cosmetic labels peanut oil goes by the name of Arachis hypogaea and water is Aqua.

The Consumers’ Association (CA) is also demanding more coherent labelling on cosmetics products. A spokesman for the consumer watchdog says: “Whether it is the food industry or the cosmetics industry, the burden of responsibility is on manufacturers to inform consumers. And that information needs to be clear and unambiguous.”

In the food industry, all new food ingredients have to be put through independent safety tests conducted by the Advisory Committee on Novel Food and Processes under European novel food processing regulations, before they can be used. But, unlike the food or drugs industries, cosmetics and their raw ingredients are not subject to review or any kind of independent pre-market approval.

The UK cosmetics industry is regulated under the Department of Trade and Industry’s 1996 cosmetics products safety regulations, which stipulate that manufacturers must conduct safety tests on product ingredients. The law also requires that cosmetics manufacturers include a label with a list of the ingredients in a product. However, fragrance chemicals – used to make cosmetics smell nice – are excepted and can be listed under the all-encompassing term of “parfum”.

According to the CA, more than 2,500 chemicals can be listed simply as parfum, despite the fact that 24 of these have been identified by the European Union Scientific Committee on Cosmetics and Non-Food Products as a common cause of allergies.

The European Commission (EC) is expected to amend a directive that also states that fragrance chemicals can be listed as parfum, so that by the end of 2002 manufacturers must list all ingredients that may cause allergic reactions. The EC is also proposing a ban on animal testing of cosmetic ingredients, and is considering a possible ban on marketing products from outside the European Union that contain ingredients tested on animals.

The UK beauty industry is seemingly unconcerned about such developments and dismisses claims that cosmetics products contain toxic ingredients. Industry trade body the Cosmetics, Toiletry and Perfumery Association (CTPA) says that the UK cosmetics industry has not carried out animal testing for a number of years.

A CTPA spokesman says: “Sceptics misrepresent facts when they say that all or most cosmetics products use unsafe ingredients. It is simply a case of scaremongering.

“Current labelling legislation informs consumers about all ingredients present in any beauty product and the information is quite adequate. Just as people know that consumption of alcohol in reasonable quantities is good, but excess may prove to be harmful, the same goes for cosmetics – and consumers know that.”

WEN disagrees saying that only 14 per cent of all chemicals produced in large quantities in Europe, not just those used in cosmetics, carry safety data – and then only at the minimum level required. A WEN spokeswoman adds: “That is why we are asking companies for more information on the nature and breadth of the safety tests and assessments – to find out if they are taking account of real life exposure and the potential for the chemicals to accumulate in our bodies or the environment.”

WEN has called upon supermarket chain Sainsbury’s to furnish details of chemicals included in its Ginger Luxurious Stimulating Bath Cream product, and cosmetics company Carter Products for details of the ingredients in its Femfresh intimate wash product.

Sainsbury’s says: “We assume that it is the levels of sodium lauryl sulphate and sodium laureth sulphate in the ginger bath cream that are the concern. These products are used widely in many cosmetics for their cleansing and emulsifying properties. All Sainsbury’s cosmetics undergo extensive testing to ensure they meet stringent safety criteria.”

Avon, the door-to-door seller of cosmetics, also says that every beauty company has its own regulations, which do not allow harmful products onto shelves. The company was recently in the news after a dab of its skin balm supposedly left a teenager’s face feeling like it was burning. Avon denies that there are any problems with the product concerned.

The British Skin Foundation (BSF) says that over recent years, instances of skin diseases have shot up dramatically. Currently there are 7 million people in the UK with some form of skin disease. BSF chief executive Matthew Patey says: “We cannot confirm whether the use of cosmetics is the only real cause of the rise in the number of skin diseases. But an increasing use of chemicals in everyday beauty products can cause considerable damage to the skin.”

Patey says that he would welcome working in association with the cosmetics industry on research and product launches.

The CTPA spokesman says that this is only “an advertising claim” because there is no legal definition of organic in the context of cosmetics.

One health and beauty buyer questions the listing of ingredients on cosmetics. He says: “Unless consumers have a degree in chemistry, most cannot understand the meaning of any of the fancy-sounding chemicals. Also the new fad of labelling any product as natural or herbal is a just another marketing ploy to attract customers.”

He says any product that has more than one per cent of any kind of natural ingredient, including water, can be called a natural cosmetics product.

Concern about what is actually being used on our skins seems to be growing alongside the booming sales in the health and beauty market. In the long term, just as with food, transparency about ingredients would probably benefit brands in building a strong relationship with consumers.