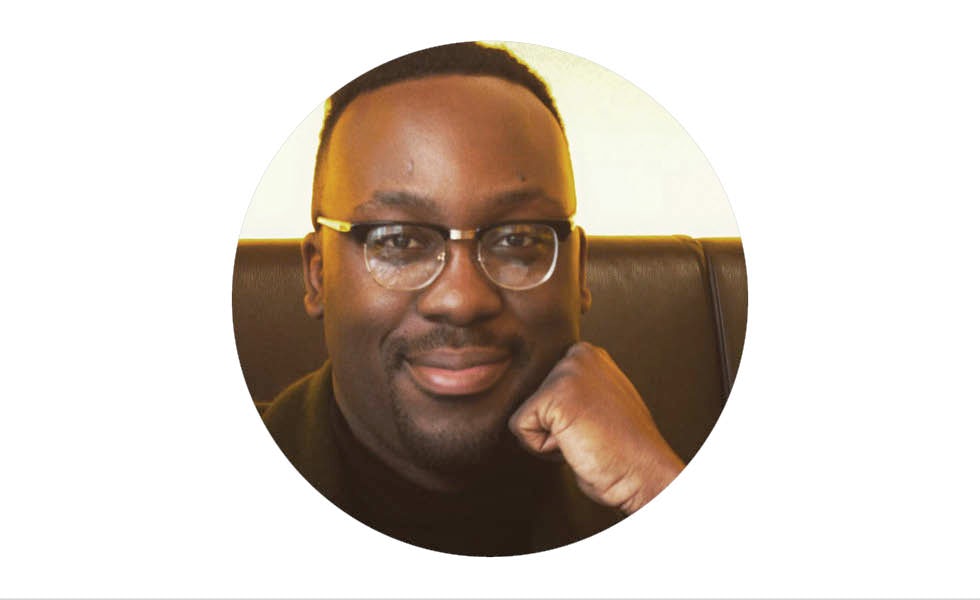 Established in 1749 as a who’s who of ruling class, Debrett’s now bills itself as the “trusted source on British social skills, etiquette and style”. From its offices in London’s Mayfair, the firm also offers a range of networking, training and mentoring opportunities to people who, presumably for the most part, aren’t short of such opportunities.

Is vlogging on the syllabus? Quite possibly: earlier in the year, Debrett’s put Zoe Suggs, better known as Zoella, and her only-slightly-less-famous boyfriend Alfie Deyes on its list of the 500 most influential people in Britain – and perhaps we shouldn’t be surprised. It is a truth universally acknowledged that a teen or early-twentysomething possessed of a sufficiently large social media following must be in want of a career typing proper nouns into a photo-captioning app.

There’s an echo of aristocratic soft power in the impact the new influencers have on their fans.  Of course, the nature and extent of online influence has been endlessly debated in the last decade, with most debates terminating as inventive theoretical models and even more inventive measurements bump up against the bottom line and other hard currencies of reality. Nonetheless, Zoe and Alfie clearly influence some lives in some ways – it’s just that the quantitative assessment has not quite caught up.

One recent trends report suggested that influencers remain “a minor force” when it comes to successful advertising. A GlobalWebIndex (GWI) survey of 42,000 web-using respondents, aged between 16 and 64 and spread across 32 countries, identified vloggers as the least effective source of product discovery from a pick-list of 20 candidates. Only seven per cent of respondents said they checked out vlogs to find out about new brands, products and services.

Such claims doubtless underestimate the branding power of vlogs – presumably very few people watch television with the aim of discovering new branded products either – but they do underscore the burning need for a rigorous assessment of the return on influencer investments.

“There are undoubtedly golden influencers out there, but it is hard work finding those nuggets”

Influencer marketing was very affordable when it emerged a few years ago, but the cost of engaging with influencers has since risen drastically. A cursory glance at WhoPaysInfluencers, a website set up by a former ‘creative strategist’ at Tumblr to expose brands’ questionable influencer-payment practices, reveals influencers bemoaning their inability to strike and maintain six-figure branding deals.

Back in the real-ish world, Zoella, the closest the UK has to a genuine vlog star, reportedly makes £50,000 a month from feeding her 10 million plus YouTube subscribers a steady diet of beauty tips and haul videos – though with banners at £20,000, £4,000 for individual items of product placement, and multiple book deals, that seems decidedly lowball.

Nor do bloggers – the original influencers – want to be left behind. Though in some regards overshadowed by the rise of Zoella and friends, blogging continues to thrive and threaten more established media across any number of lucrative verticals. Many bloggers are blurring any putative distinction between influencers by simultaneously blogging, vlogging, posting photographs on Instagram, et al.

Our own research, conducted earlier in the year in conjunction with Canterbury Christ Church University, counted tens of thousands of fashion bloggers, parenting bloggers, and food bloggers in the UK. All the major consumer lifestyle segments were thoroughly represented and just about any subject was covered. There was what looked like the full gamut of potential influencer value out there for brands.

Some bloggers ran multiple websites that each received hundreds of thousands of monthly views, but 10% had no idea how much traffic they had. Almost a fifth blogged five or more times a week, while almost a quarter blogged only once a week. A significant majority reported having strong relationships with brands, and 37% said they received six or more PR pitches every week – and yet the overwhelming majority of UK bloggers reported that very few instances of blogger outreach ever resulted in a post.

Part of the explanation for that disconnect might lie in UK bloggers’ expectations for remuneration. Nearly half (47%) of respondents agreed with the statement ‘PRs expect bloggers to support their brand for little in return’, while 30% believed they should be paid for any coverage given to brands. One might imagine some aspiring influencers walk a thin line between commercially savvy and a self-defeating sense of entitlement. 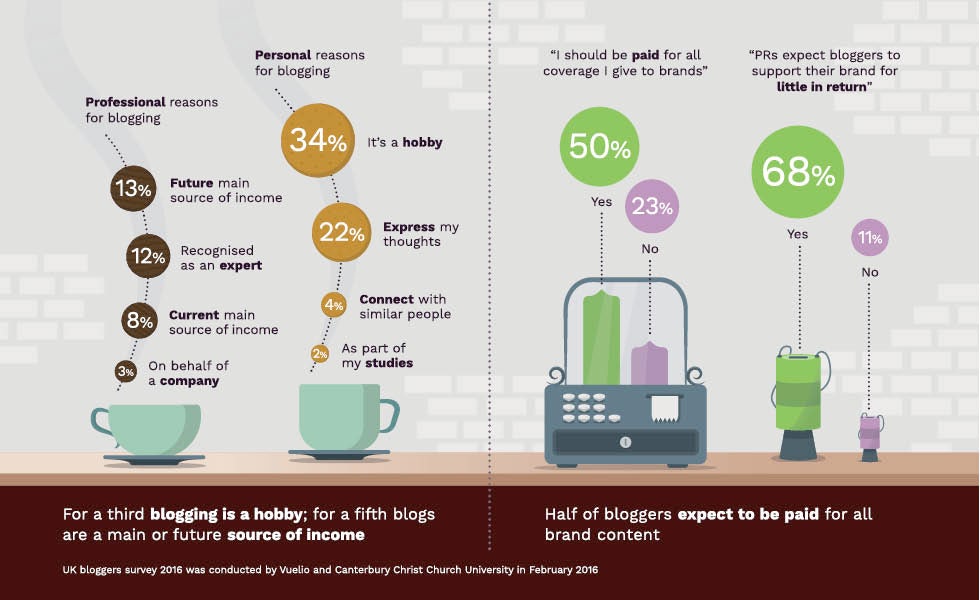 Regulatory bodies add to the confusion. Trading Standards, the Advertising Standards
Authority, the Competition and Markets Authority, even Google, all have various overlapping remits that allow them some say over influencers’ commercial activities. Invariably, such organisations put the onus on the influencer, rather than the brand, to ensure full disclosure.

Encouragingly, the Vuelio research suggests that the overwhelming majority of UK bloggers are keen to uphold such standards. They understand the importance of transparency (read: ‘authenticity’) to their audience, and as such, most professional bloggers are probably less corruptible than some of their mainstream media peers.

How can brands be sure they are working with the influencers that count? Simply totting up the Instagram followers for every hipster with a man-bun is unlikely to deliver the best results. Influence scores that algorithmically interpret a variety of social activities are better, but probably still not enough unless accompanied by deeper understanding.

The best influence marketers have is a detailed appreciation of influencer positions among overlapping extended networks. At one level, they have the tools to make a rough assessment  of how any given message will propagate. More than that, they have a real grasp of individuals whose entire business is about relationships and friendships.

Theory is one thing, but maintaining a record of how influence has worked in practice – for your brand, or for those of your competitors – is the best route to productive influencer marketing. There are undoubtedly golden influencers out there, but it’s hard work finding those nuggets. Recognising and revisiting approaches that worked in the past is crucial in achieving any kind of scale in the future.

It is worth noting that the GWI survey suggested twice as many web users would look to celebrities as vloggers for product advice. There are reasons the biggest budgets will happily overpay a Kardashian for endorsements – they simply work better when people care about and admire the person doing the endorsing. But as Debrett’s has well understood, where fame once begot influence, influence now begets fame.

To succeed in a changing B2B communications landscape, brands need to put people – not products – at the heart of their PR and marketing strategies, says Nelson Bostock Unlimited’s Nick Clark. 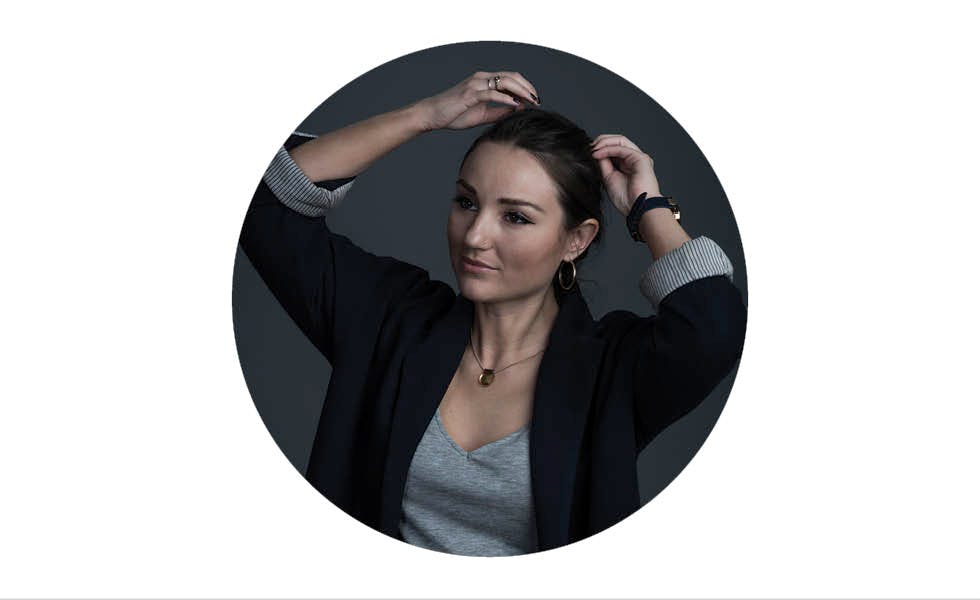 As a would-be influencer, it is important to get on board the social media bus and use it as a tool to stay a step ahead of your industry peers and competition, says FinchFactor’s Donna Amey. 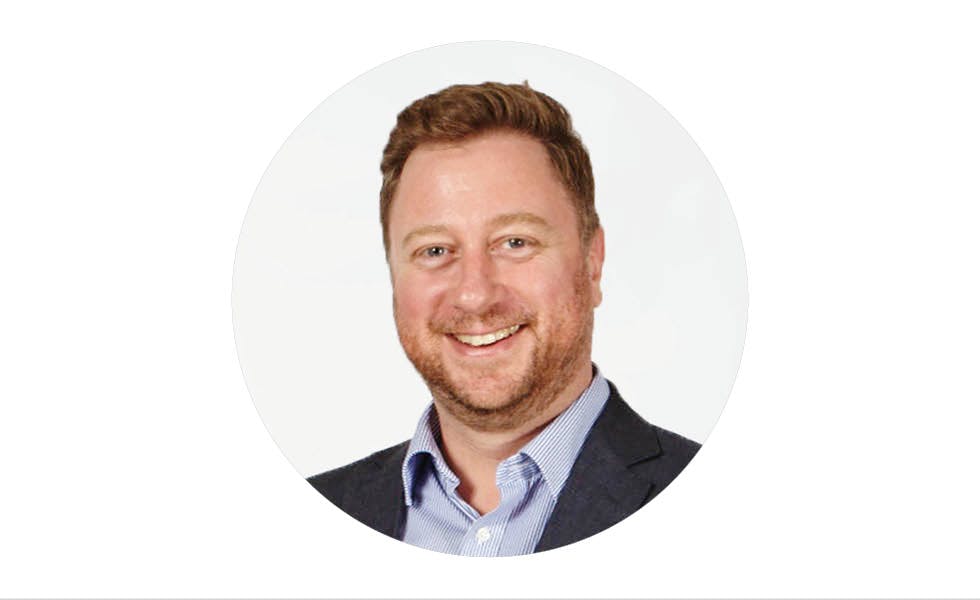 The role and expectations of PR and marketing are changing, says Dominic Shales at Lexis, who questions whether within 10 years marketing could become a sub-set of PR.