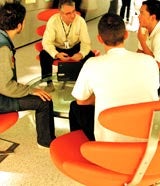 As a businesswoman and entrepreneur I am depressed by the same old research telling women the same old thing about promotion, pay and prospects (MW November 16, “Report shows women still poorly represented in ad industry”). And yes, I know it’s been getting worse for women – even in the research industry – but they just don’t see it.

Women are too busy “doing the job” and avoiding the politics, thus leaving all the plotting to men.

Young women collude with the culture by accepting promotion for the sake of doing the job – and not negotiating at the beginning on contractual matters including share involvement.

As long as women are themselves complacent nothing will change.