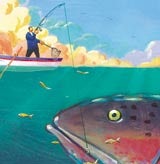 Ever since Hoover’s infamous free flights promotion, companies have been extremely aware of the risks of unforeseen redemption levels. Many take out financial cover, such as fixed-fee contracts or over-redemption insurance, while others choose instant-win promotions, where the maximum financial cost can be predicted with confidence beforehand. But the best-laid plans can still go wrong, and some companies still lose money on promotions that run way over budget.

Fotorama is an agency that specialises in fixed-fee contracts. The company charges a client a set amount to run a promotion. Once agreed, this does not change – irrespective of the final redemption level. The fee can also cover the entire service, including handling and fulfilment. In this way, Fotorama contracts to shoulder all responsibility on behalf of the client.

From the client’s point of view, it’s rather like taking out a fixed-interest mortgage: there is always the possibility of having to pay more than they would have done had they managed their own risk, but they could also end up paying significantly less.

For a fixed-fee business, getting the predictions right is therefore vital. But Fotorama managing director Nigel Ashdown, who has been in the business for over 20 years, says that this is actually getting harder: “We conducted some research recently and discovered that only eight per cent of marketers’ forecasts were within ten per cent of the final redemption level. The good news was that the majority had over-estimated the likely response – but the bad news was that when they got it wrong, they got it spectacularly wrong.”

The forecast is variable

Ashdown cites the example of a financial services company offering free weekend breaks – the booking rate was 79 per cent, against a 35 per cent forecast, adding &£1.1m to the cost of the promotion. Even re-running an identical promotion can result in widely differing response rates, he says: “Brand teams need to be far more careful in both forecasting and making allowances in budgets for these vast variations. They must look closely at eliminating the risks of under-budgeting, which can be costly.”

So why has predicting redemption levels become so much more difficult? Observers point to several reasons, but the two main ones are that new response routes, such as SMS text-messaging, are still unknown quantities while initiatives such as Tesco’s Clubcard have made consumers more willing to clip and redeem coupons.

Whereas a three per cent coupon redemption rate was once considered a good level, five to eight per cent is now quite normal and some promotions reach well over ten per cent.

But is this just scaremongering, designed to lure clients into expensive contractual arrangements they don’t really need? Andrew Jones, commercial director of The Marketing Store, is cynical. “Clients are sensible people and they don’t like variable outcomes. They know that they need to cover themselves if there really is an element of risk, but it’s quite rare for there to be one,” he says.

“The vast majority of promotions have predictable outcomes and associated costs, because a finite number of prizes is on offer. In addition, clients themselves, and the planners, have a lot of expertise in predicting how a promotion will perform. Risk management really isn’t a big issue.”

But Becky Munday, managing director of another fixed-fee specialist, Mando, disagrees. She says: “I’m constantly astonished by how many people aren’t even aware that there may be an issue, much less that there are ways of managing it.”

Part of the problem, she believes, is that too many companies still entrust junior brand managers, or their sales promotion agency, with sorting out the logistics. “Simple things are often overlooked. For instance, people tend to underestimate the true cost of over-redemption and assume that any extra redemptions will have the same unit cost as the planned ones. In fact, if you need to get stock in at short notice, it is probably going to cost you a lot more in terms of night-working, premium postage rates and air freight.”

David Armstrong, managing director of travel and leisure sales promotion agency Aztec Marketing Solutions, says that another problem is that many companies, both clients and agencies, underestimate the legal implications of promotional activity. “Many agencies don’t really understand insurance and will happily tell their client that the promotion is sound because they have taken out over-redemption insurance. It may turn out, however, that this only covers the client up to a certain limit, or that the excess is prohibitively high. Clients need to be far more assertive about asking to see the precise terms and conditions of any agreement,” he says.

Armstrong also cautions against letting agencies take responsibility for form-filling: “People often don’t appreciate that any incorrect information on an insurance application form is technically a breach of contract. It’s far too important to be entrusted to someone at the agency.”

Fear of complications with insurance and concerns about its usefulness have definitely provided a boost to the fixed-fee industry, but PIMS-SCA managing director Mark Kimber believes strongly that both have their place. His agency is unusual in offering both fixed-fee and insured promotions to clients.

“We will recommend whichever we think is most appropriate under the circumstances,” he says. “However, when you are trying to do something different, a fixed-fee contract can look frighteningly expensive because no one knows what the response will be. The promotion could as easily fail as succeed and then the promoter has passed on a huge fee unnecessarily.”

To counter this, PIMS-SCA has recently introduced a pay-back guarantee to its fixed-fee contracts, refunding a percentage of the fee if the promotion significantly underperforms.

Kimber maintains that risk-management agencies such as PIMS-SCA can help clients to be more adventurous with their promotions than they might otherwise be. For instance, Carlsberg’s Win with England 2002 promotion offered participants a cash prize if a player featured on the promotional pack scored in the featured game. Many clients might have been nervous about running a promotion with such uncertain outcomes, but PIMS-SCA did the sums and managed the entire promotion in return for a fixed fee from Carlsberg.

Kirsty Tinsley, account director at sales promotion agency Dynamo, says agencies need to be more creative about helping clients to manage potential risk in promotions. Good planning is essential, she insists: “When you’re calculating payback, you should look at brand awareness and the media value your promotion generates, as well as any increase in sales during the promotional period.

“Every week, 12 million shoppers visit Tesco, so a high-impact in-store unit can generate similar coverage to traditional media routes, with the added benefit of achieving an immediate sales boost.” Tinsley also warns about hidden costs, for instance from free routes of entry, which can end up costing the promoter more than the prize fund itself. When using a third party, she suggests, it is essential that where it makes its profit is transparent, so that you can be sure it is a reputable company that understands the deal it is putting together. Finally, she suggests that a good promotion should be researched in advance, giving a reasonable idea of how popular it is likely to be.

But Ashdown believes sales promotion is, by its nature, inherently risky and that clients will always need good advice from agencies and suppliers if they are to keep risk to a manageable level. This could become even more of an issue next year: in January 2005, sales promotion insurance will come under the remit of the Financial Services Authority and anyone giving advice on insurance will have to be authorised by the FSA.

The jury is still out on what the impact on the industry will be. Some say it will improve standards by driving cowboys out of the business, but others fear that it will make agencies even more nervous about discussing insurance arrangements with their clients. Either way, the risks inherent in planning and managing promotions are not going to go away for a long time.