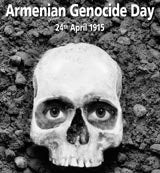 Jojo Communications has created a national press campaign to mark Armenian Genocide Day. The ads will run in The Times, The Independent and The Herald Tribune this Thursday for one day. The campaign is designed to promote debate over the Armenian genocide, in which an estimated 1.5 million Armenians were reported to have died in Ottoman Turkey between 1915 and 1923. The campaign is funded by Raffy Manoukian, an Armenian living in London, who supports a campaign to bring the genocide to international attention. The ad features a ‘living skull’ and a quote made by Hitler to his generals in 1939, in which he refers to the feasibility of undertaking the Jewish Holocaust without recrimination because of the precedent set by the reportedly unpunished destruction of the Armenians.