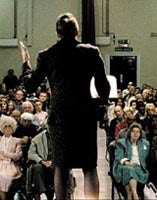 As UK armed forces prepare for greater involvement with US forces in the attacks on the Taliban government in Afghanistan, the army is launching a national recruitment campaign to target potential leaders.

The &£1m campaign developed by Saatchi &amp; Saatchi breaks on November 2. The ads will run across cinema, radio, outdoor and press, with activity targeting 45 university campuses. There will also be online advertising.

The 60-second cinema ad has the tagline “People aren’t easily led”. It does not feature any military imagery and has no voiceover; instead it portrays five different civilian situations that need leadership skills, such as being a lecturer or social worker.

The aim of the ads is to portray the army as a positive career choice and show that the leadership skills learned within it are transferable to civilian jobs. The campaign also addresses the myth that signing up commits you to the army for a lifetime, by pointing out that recruits sign up for one year’s training and three years’ active service.

An army spokesman says that the campaign had been conceived a year ago and its launch during the current international crisis was merely a coincidence. He adds that November was the traditional graduate recruitment period for all industries and it was hard to predict what effect the military campaign in Afghanistan would have on the ad campaign’s effectiveness.

Media planning is by Zenith Media and cinema buying by Universal McCann.