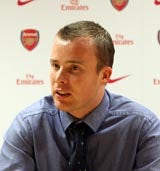 The position has been created as part of a major restructuring and investment into the club’s commercial operation, following the appointment of chief commercial officer Tom Fox in August last year.

Kinnear will now be in charge of “broadening the club’s reputation and maximising revenue streams on a global scale”. He will report to Fox.

Kinnear, a former Procter & Gamble and Coca-Cola marketer, has been with the Gunners for five years. He has been responsible for the club’s domestic and international marketing activities, including the team’s move to the Emirates Stadium, named after the club’s lead sponsor.

Fox says: “We are confident that the combination of elevating Angus Kinnear into the new role of marketing director, together with several key new appointments, will enhance our ability as a club to grow our commercial revenue both domestically and abroad.”

She will be responsible for the overall positioning and promotion of the Olympic Park and starts on 1 February. Dorothy Fenwick had been looking after marketing as an interim.

Orange will continue to be the headline sponsor of the Africa Cup of Nations despite the controversy surrounding the tournament.

Premier Foods says its most popular brands, including Hovis, Mr Kipling and Bisto have benefited from supermarkets experiencing a bumper Christmas, and a healthy 2009.