The problems started when a video emerged of Baltimore Ravens player Ray Rice knocking out his then-fiancee (now wife) in a lift in February. An ESPN report claimed that the NFL was passive in dealing with the matter and should have taken action against Rice earlier, as the player was only suspended indefinitely by the NFL last week.

The NFL insisted that it hadn’t seen the video until this month but critics say that it should have tried harder to obtain the video evidence earlier. Other incidents of NFL players alleged to have taken part in violence have also emerged. San Francisco 49ers’ Ray McDonald has been arrested on domestic violence charges while Minnesota Vikings’ Adrian Peterson has been indicted on charges of negligent injury to a child.

Obviously the NFL is not responsible for the personal actions of those who play in its league. But equally, its consumers expect the NFL brand to stand for fair play off the field as well as on. The NFL had a negative ‘buzz’ score of -37 on September 14, down from a positive 36 on September 8, according to YouGov’s BrandIndex.

NFL sponsors are under pressure from consumers to take action. Make-up brand CoverGirl, the NFL’s official beauty sponsor, has seen its posters doctored to show women with bruises and black eyes, all heavily shared on social media. Both AB InBev and PepsiCo have publicly questioned NFL’s handling of the situation.

The NFL has hired four female consultants to improve its domestic violence and sexual abuse policies to reassure fans and this week announced a female chief marketer – Dawn Hudson. But can this undo the brand damage? Its reputation is unlikely to be restored immediately but it’s a start. After all, this week’s Credit Suisse report on board equality claims that “based on Bloomberg data about 94 per cent of S&P 500 CEOs held top operations positions immediately before ascending to the top job.” Unfortunately, women are “relatively scarce” in these positions. So it isn’t even that women are being passed over; they just aren’t there.

If your organisation doesn’t have a mix of people – women, men, ethnicity and ages – you essentially become an island. And while the way your brand does business seems normal on that island, you risk being hopelessly out of touch on the mainland. 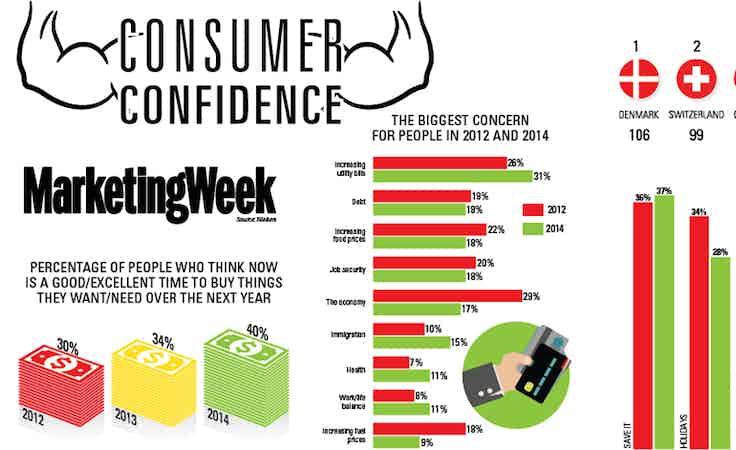 View the full-size infographic. Consumers can be persuaded to spend as confidence in the UK nears a seven-year high but the recession has taught people to better manage household budgets.