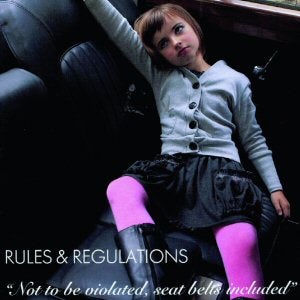 Children’s clothing company No Added Sugar has been ordered to stop distributing its latest catalogue because it contains images of children in sexually suggestive poses.

The Advertising Standards Authority (ASA) has upheld complaints about three images featured in the catalogue. It says they are offensive and has told the company not to use them again.

One image shows a young heavily made-up girl reclining in a car, with text reading “Not to be violated, seat belts included”. Another features a girl, also wearing heavy make-up, looking behind her with the text “a gentleman should never keep a lady waiting”. The third shows a young boy pushing a car, with the top of his buttocks exposed. No Added Sugar said it made “edgy” baby and children’s clothing, but added the idea that the photos had any sexual references was “shocking and upsetting”. The pictures in the catalogue tell the story of “A weekend at Great Aunt Mary’s and her lessons in etiquette”. The pictures depict the children’s response to the rules.

The company says 14,000 catalogues were sent out and it has had six complaints directly. The regulator has told No Added Sugar to consult its Copy Advice Team before running any ads in the future.

• The ASA has rapped British Sky Broadcasting (BSkyB) for ads that implied terrestrial channels would only be available on Sky after digital switchover.

Liverpool Football Club’s new owner says he will consider selling the naming rights to its new stadium to pay for an increase in transfer spending. American sports tycoons George Gillett and Tom Hicks paid an estimated £219m for the Premiership club this week, after beating a rival bid from investment group Dubai International Capital. The […]

Virgin Media is launching its first branded television channel, Virgin Central, along with a host of new services to mark its rebrand from NTL:Telewest. The cable giant, which officially relaunches today, says the free Virgin Central is a “revolutionary” on-demand entertainment channel, which allows viewers to stop, rewind and pause content. Programmes will include West […]

Tesco reports that people are already shunning poultry products like the plague; plumping, ironically, for beef instead. Never mind that the chances of dying from the present strain of avian flu are even longer than those of winning the National Lottery jackpot. The same could have been said of contracting variant Creutzfeldt Jakob disease, and […]