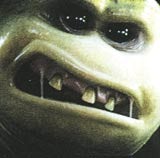 A television ad for Domestos Bleach Cleaning Spray, featuring an animated germ, has been banned from being shown around children’s programmes after complaints that it was frightening children.

The ad, created by Lowe, shows a grey monster lunging and spitting at the camera as it bemoans the strength of the spray. The voiceover then announces that “millions of germs will die”.

The Advertising Standards Authority (ASA) has banned the ad from children’s scheduling after it received complaints from parents, who said that it gave their children nightmares.

The ASA has received complaints about a Metropolitan Police radio ad, which highlights the problems of domestic abuse, after it was mistakenly broadcast during drive-time slots – against the advice of the Radio Advertising Clearance Centre.

The Miles Calcraft Briginshaw Duffy-created ad featured a distressed woman being attacked by her boyfriend and calling the police for help. The ASA upheld several complaints against the advertiser.

A radio ad for The Spectator magazine, which compared the flaying of politicians in medieval times to the publication’s treatment of candidates during the General Election, was given the all clear by the ASA.

The authority noted that the ad, which was created by Clemmow Hornby Inge, was only aired on stations with few child listeners, and that the tone was factual.