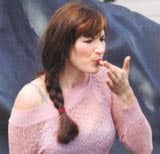 Wanadoo has been forced to pull its latest television ad after the Advertising Standards Authority ruled that it was “irresponsible” to show young people playing in a scrapyard.

The campaign, which was created by M&C Saatchi, triggered 68 complaints. It featured a group of young people cavorting in a scrapyard and a couple kissing in the back seat of a wrecked car.

The ASA decreed that the kiss was “much too graphic” for daytime television and that the location was “irresponsible”. It has ruled that the ad should no longer be shown.

Marmite has been told that its “blob” ads cannot be shown at times when children might be watching. The ASA upheld complaints about two DDB London-created Marmite ads, which shows people running away screaming from a giant blob of the spread.

The watchdog also upheld five different complaints from the Food Commission about a leaflet promoting Popzone soft drinks, which was inserted in nhs Family Choice magazine. It has ordered that the leaflet be amended so that it does not suggest that the NHS endorses the drinks.

A complaint about a newspaper ad for the Seat Altea, featuring five packaged condoms and the slogan “perform safely”, has not been upheld.

Leo Burnett has pulled out of the pitch for Abbey’s £30m advertising account because of a conflict over its relationship with Scottish Widows. Lowe, WCRS and incumbent TBWA/London remain on the shortlist.

The RAC lags behind the AA, while Aviva’s Norwich Union wants to supplant RBS as the UK’s top motor insurer. A merger could be just the ticket, but a culture clash looks likely. By Martin Croft

Unilever brand vice-president William Brown has been made interim marketing director for personal care. The move to Lever FabergÃ© is a sideways step for Brown, whose Unilever brand role gave him responsibility for the global corporate identity of Unilever, developing it with a new logo and mission statement in May last year (MW February 19,2004). […]