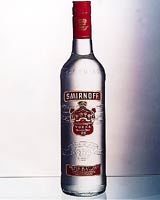 Guinness UDV has been rapped by the Advertising Standards Authority (ASA) this week after an ad for its Smirnoff vodka brand featuring a naked man attracted almost 50 complaints from members of the public.

The poster ad, created by J Walter Thompson, showed a naked man sliding down a curved banister towards a large round finial. The strapline read “…If Smirnoff made painkillers”.

Although the man’s genitals were blurred in the picture, the complainants believed part of them were visible and argued that the poster was offensive.

Despite the advertiser’s reassurances that the man was wearing flesh-coloured underpants, the ASA ruled that the ad was likely to cause serious or widespread offence. The authority also said the poster could encourage excessive drinking by showing what was clearly a drunken activity.

Tesco also came under fire for a leaflet that claimed the supermarket was up to 16 per cent cheaper than Boots for deodorants, razors and shampoos. The leaflet featured several branded products and compared Tesco’s prices with the prices of Boots’ branded products.

The ASA agreed with Boots that Tesco was misleading its customers because the ad did not compare like-for-like products or store locations. It ordered the supermarket to withdraw the leaflets.