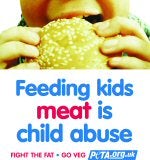 The advertising regulator has cleared charity People for the Ethical Treatment of Animals (PETA) over an ad that claimed that giving meat to children is “child abuse”.

The press ad showed a picture of an overweight child eating a burger with the strapline “Feeding kids meat is child abuse”.

The Advertising Standards Authority (ASA) received 67 complaints about the ad, including from The National Farmers’ Union, the Guild of Welsh and Beef Supplies, the International Meat Trade and members of the public.

Some complaints claimed the ad “trivialised child abuse” and others said the ad misleadingly implied that meat caused obesity and could stop parents from providing their children with sufficient nutrients.

PETA used research to back its claim that feeding a child a meat-rich diet that can cause health effects was tantamount to abuse.

The ASA ruled that consumers were unlikely to be misled or distressed as the organisation is a campaigning group with a well-known pro-vegetarian animal welfare agenda and PETA was not breaking any rules by expressing its opinion.

• The ASA also cleared an ad attacking air travel and airport expansion, which purported to be for the spoof organisation SPURT, but was in fact placed by AirportWatch, an umbrella alliance of environmental organisations including Greenpeace.

The ASA received 13 complaints, including some from people who thought the ad was genuine. It ruled that most readers would be able to recognise that it was fake and the claims were satirical.

Dynamo. The very name conjures up images of energy and adventure, and that’s what the staff from the agency of that name produced on a team-building exercise recently. The Ray Mears-style course on survival skills and life in the bush was held in – wait for it – tropical Godalming, Surrey. And axe throwing, fire […]

After Tesco set out it ethical trading plans last week, counting the carbon cost of food could become as normal as totting up the carbs – and more shoppers have the money and mind to buy ethically.