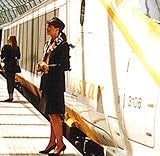 Eurostar poster ads have been dubbed “offensive” and “full of sexual innuendo” by complainants to the Advertising Standards Authority. The ASA is deciding whether to launch an investigation into the complaints.

Two of the ads – one of which shows a group of naked people running towards a beach with the strapline “For why why not” and the other a pair of feet sticking out from the end of a bed under the caption “From the first time to the next time” provoked complaints.

The ASA also received a complaint about a third ad which features a group of young men with the heading “From up for it to out of it via all the clubs in Paris”.

An ASA spokesman says the authority will decide by the end of this week whether to launch an investigation which could result in the posters being banned.

A spokesman for Eurostar confirmed the ASA had asked for copies of the ads but adds: “As far as we are concerned the campaign is light-hearted.”

The ads were created by TBWA/London which won the £15m creative account for the cross-channel train operator last November. It is not the first time the agency has courted controversy. Last month it came under fire for its poster ads for fashion retailer French Connection.

All posters for the retail chain will have to be vetted for the next two years after the ASA upheld more than 130 complaints against its “fcukinkybugger.com” campaign.