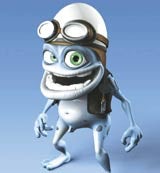 The Advertising Standards Agency (ASA) has received more than 200 complaints about television ads for mobile ringtones featuring the “Crazy Frog”.

Many of the objections are about the frequency of the ads starring the amphibian, which is number one in the pop charts with its version of 1980s hit Axel F.

However, the ASA is unable to adjudicate on those complaints as decisions on how often ads are shown are down to the individual broadcasters.

But the watchdog is investigating claims that the ads target children and do not make it clear how much the downloads will cost.

– The most complained-about ad in British TV history has been given a clean bill of health by the ASA.

The now-infamous Bartle Bogle Hegarty ad for KFC, which shows call-centre staff singing with their mouths full, attracted 1,671 complaints for encouraging bad manners as well as accusations of “unpleasantness”, portraying call-centre staff in a bad light, mocking people with speech impediments, increasing the risk of people choking and encouraging over-eating.

However, none of the complaints have been upheld and the ASA says that if children are taught good table manners then they would not change their behaviour because of one ad.

The ASA has ruled that the ad does not make it clear that the supplement was a competition rather than a dating service.

Confectionery brand Ferrero has appointed Nitrosoul to its Â£10m advertising agency roster. Its first task will be to handle the launch campaign for its adult biscuit Giotto.

GCap Media, owner of the Capital Radio group, Classic FM and 54 local radio stations, is calling for the radio industry to unite in an effort to increase radio’s share of advertising revenue to ten per cent and to boost the reach and revenue of digital radio. Gavin Miller, the outgoing commercial marketing director of […]

The Diary doesn’t usually get all Lynne Truss when it comes to spelling mistakes, but this poster, found in the Lakeside Shopping Centre, Thurrock, couldn’t be passed without comment. PartyPoker.com’s boast that it is “biger” than the competition probably went unnoticed by the resident “hoodies”, but an ever-vigilant reader homed in on it straight away. […]