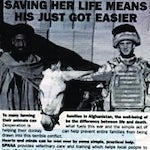 The Society for the Protection of Animals Abroad (SPANA) ran a press ad showing an Afghan, a donkey and a British soldier. The headline read “Saving her life means his just got easier” and accompanying text said that the well-being of animals was vital to farming families in the country and “hearts and minds can be won over by simple, practical help”.

The ad went on to say Spana could provide that help via veterinary training and “Ultimately, our brave British serviceman and women can benefit from the care which you help us provide.”

Complainants challenged whether the claim troops could benefit from the help was misleading and also whether the ad was offensive and exploited British troops to get donations.

Spana says that the small-scale veterinary programme was initiated by the Royal Army Veterinary Corps in 2009 in Helmand province as part of a hearts and minds initiative and it had been approached to expand the programme through provision of targeted veterinary training.

It argued that improved relations with rural Afghans would lessen Taliban influence and that the Ministry of Defence had approved the creative and wording of the ad.

The Advertising Standard Authority (ASA) said that the claim that that troops could benefit from donations would be understood by consumers to mean that any money donated “would directly assist British servicemen and women” and was misleading.

However, the ASA did not uphold claims of exploitation or offensiveness, as the MoD had approved the copy and the aim of the scheme was to improve relations between Afghans and British serviceman.

Jeremy Hulme, chief executive of Spana, says: “We’re disappointed with the ruling, especially as we thought the fact that the British army approached Spana to assist with their operation in the first place would demonstrate that we we’re supporting the work of our troops.

“However, we do accept that the ASA finds it hard to see any direct link between our work in Afghanistan and any improvement in the conditions of our troops as there are so many contributing factors. We are pleased that the ASA did not believe our advertisement to be exploitative or offensive as our intention has only ever been to provide positive support to animals and to people.

“We can confirm that the advertisements will be changed in accordance with the ruling.”