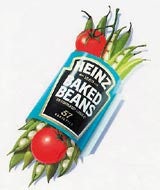 HJ Heinz has been slapped on the wrists by the Advertising Standards Authority (ASA) for claiming that Heinz Tomato Soup can be counted as two of the recommended daily intake of five portions of fruit and vegetables.

The Food Commission complained about a Heinz press and poster campaign, created by Leo Burnett, which used the strapline: “5-A-Day The Heinz Way.”

The advertiser has been asked to amend the ad, but the ASA did not uphold complaints against the food company’s claim that the canned soup product is healthy and eating it can be regarded as equivalent to eating fresh fruit and vegetables.

Heinz promotes about 70 products under the “5-A-Day” banner.

Separately, the ASA has dubbed a poster campaign for Midway Games’ Mortal Kombat: Deadly Alliance console game as irresponsible, since it condones violence. The posters for the game show a hooded youth wiping his bloodied hand on the shoulder of a middle-aged man. The campaign uses the strapline: “Mortal Kombat. Deadly Alliance. It’s in us all.”

The ASA has asked the advertiser to consult the Committee of Advertising Practice (CAP) copy advice team before advertising again.