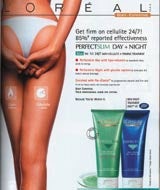 L’OrÃ©al is once again under the spotlight for its “cellulite-reduction” product PerfectSlim as well as its Wrinkle De-crease cream.

The Advertising Standards Authority has upheld a complaint that the television advertisement for PerfectSlim, created by McCann Erickson, overstated what the product could actually achieve.

L’OrÃ©al’s Wrinkle De-crease has also been rapped for making claims that it cannot support. The ASA said the complaint about the claim that “76 per cent (of 50 women’s self-evaluation after three weeks) reported visible reduction on expression lines” is misleading.

Craik Jones has named Mark Cripps as its new head of digital.

Tiger Beer has picked Young & Rubicam/ Singapore to handle its Â£1m creative business in the UK.