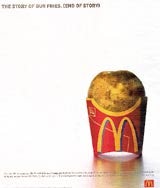 McDonald’s has been criticised by the Advertising Standards Authority (ASA) for using a misleading claim in its press campaign to promote its French fries.

The strapline: “We peel them, slice them, fry them and that’s it” does not describe the complete process of how the fries are produced, according to the ASA.

The Food Commission and members of the public also objected to the fact that the fast-food chain made no mention of the significant amounts of salt added to its French fries.

The ASA has ruled that because the campaign contains claims such as “End of story” and “…that’s it” most people will believe that McDonald’s has described the complete process of how it produces fries. McDonald’s has been asked not to repeat the claim.

Separately, retailer Comet has been accused of inflating the price of an LG 17-inch widescreen television to include the price of a “free” DVD player that it was offering. The ASA has also censured it for not honouring its price guarantee for the TV.

The advertising watchdog has asked the retailer to amend its ad, which uses the strapline: “Always Low Prices – Guaranteed… The Comet Price Guarantee”. Comet has been asked to seek help from the Committee of Advertising Practice (CAP) advice team for future “price guarantee” campaigns.