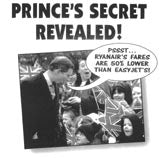 Low-cost airline Ryanair has been rapped by the Advertising Standards Authority (ASA) for using an image of Prince Charles to promote its low fares.

The ad, which ran in several newspapers under the headline: “Prince’s Secret Revealed.” attracted 19 complaints, although none were from the Prince’s official office at St James’s Palace. The ASA ruled that the ads were irreverent to the Royal Family and has upheld the complaints.

The ASA has ruled that the budget airline should have got permission to use photographs of the Royal Family in ad campaigns.

The ASA has banned a Nokia UK ad campaign for the combined phone and handheld games console N-Gage. The campaign, created by Grey Advertising, comprises a series of executions. One of the ads carries the strapline: “This is where I took on three guys… and made them cry like babies” and shows a picture of an alleyway at night. The ad has been upheld for being offensive and distressing in its depiction of violence and crime.

The ASA has upheld complaints against three other ads in the same series, which it says condone and encourage sexual violence towards women.

The Consumers’ Association has issued a list of demands to the food industry and the Government. If they are not acted upon, a naming and shaming campaign will ensue. By Caroline Parry

Many brand owners are fearful of radical change to their packaging, but often a major overhaul can unlock sales potential no one had realised was there, says Richenda Wilson

Leo Burnett has created a TV and national press recruitment campaign for the Department of Health.