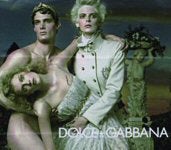 Dolce & Gabbana has been savaged by the Advertising Standards Authority over two press ads that the regulator has ruled glamorise knife crime and are likely to cause widespread offence.

In one ad, two men with knives appear to threaten two other men, one of whom has been wounded. In the other execution, two men support a woman who is bleeding from a wound in her breast and holding a knife.

The ASA investigated after receiving 166 complaints from consumers and lobby groups such as Mothers Against Murder And Aggression (MAMAA).

The ASA also slammed The Times for running the ad showing the wounded woman alongside an article on knife violence.

Dolce & Gabbana said that its Autumn/Winter 2006/07 collections were designed to evoke the Napoleonic period and the related ad campaign took its inspiration from well-known paintings of the time by Delacroix and David.

It also said that both ads ran across Europe, China, Hong Kong, Japan and the US without complaints. The fashion house further argued that the ads were so stylised that they could not cause offence.

The ASA upheld complaints against the ads on five separate points although it did not uphold a complaint that the ad featuring the wounded woman might encourage young people to commit self-harm.

The ASA reminded D&G that it had a duty to act responsibly when developing ads. It also told D&G and The Times to take greater care in the placement of similar ads in future.

• The ASA has launched an investigation into the National Health Service’s new anti-smoking campaign.

The ads, which show people with fish hooks in their mouths, received 60 complaints just after launching on January 1 (MW last week). Complainants say the ads are violent, sickening, distasteful, upsetting to children, distressing and intimidating. The campaign was created by Miles Calcraft Briginshaw Duffy.

HMV Group today has announced the departure of a key senior board member as it reported a first-half loss of £31.8m, This was despite an improvement in sales over the Christmas trading period in the UK and Ireland. The music and book retailer confirmed UK and Ireland managing director Steve Knott would leave the company […]

ITV’s poaching of Telegraph new media chief Annelies van den Belt (MW last week) is an indication of just how seriously traditional media are taking the online world. Van den Belt joins as managing director of the broadcaster’s broadband division ahead of a relaunch of its website, which will herald the UK’s first free, full […]