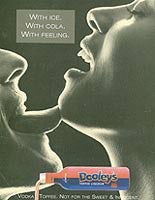 Alcohol Concern has complained to the Advertising Standards Authority (ASA) about a magazine ad for United Brands’ Dooley’s liqueur, but the complaint has not been upheld.

The alcohol abuse charity complained that the ad – which was created by Good Ideas and showed a woman with her mouth open, eyes shut and her head thrown backwards as her chin was licked by a man – suggested that the drink could enhance sexual success or capability.

The ASA ruled that the image was playful and not overtly sexual and that it did not link consumption of alcohol with sex.

The ASA also threw out complaints against a Nestlé Yorkie advertisement feature and pullout page stickers in EMAP’s FHM magazine.

The advertorial was headlined “Size Matters” and the stickers said “It’s not for girls”, showing a circular road sign of a woman with a red line through the middle. The complainant objected that the advertorial was offensive because its main purpose was to degrade women.

The ASA ruling states that the advertorial was likely to be seen as humorous, not as degrading or offensive, by readers of the magazine and that it was unlikely to cause serious or widespread offence.