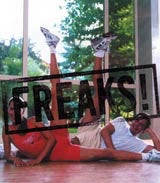 Healthcare and chemicals group Bayer has come under fire for the second time in two weeks about an ad campaign for its Alka XS Go pain relief tablets.

The Abbott Mead Vickers.BBDO campaign has been attacked by The World Hindu Association for ridiculing the Hindu faith. The Advertising Standards Authority (ASA) upheld the complaint this week.

In an ad that appeared in the newspaper Metro, a man and a woman practising yoga have the word rubbish stamped across them. The World Hindu Association claims the ad implies that it was more beneficial for people to take caffeine than practice Hindu worship.

The ASA ruled the ad was likely to cause serious or widespread offence and rejected Bayer’s argument that Metro readers would not generally associate yoga with Hinduism.

Last week, alcohol industry watchdog the Portman Group objected to a washroom poster, which formed part of the campaign, containing a muscular man with the word sad stamped across it.

The ASA agreed that the ad encouraged excessive drinking.

The ads formed part of a £1.4 m campaign that started in December. Alka XS Go was launched last June and contains caffeine and painkillers.