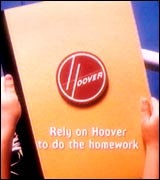 Dyson Appliances has won the latest round in its advertising war with Hoover as the two companies prepare to do battle in the High Court over alleged copyright infringements.

The Advertising Standards Authority (ASA) this week called on Hoover to drop claims that its bagless Vortex model was “the most advanced vacuum cleaner on the market”. The ASA also rejected a claim made in brochure and national press ads that the Vortex would save customers &£140 on dust filters over its lifetime.

In a wide-ranging criticism of Hoover in the ASA’s monthly report, the authority slammed the vacuum cleaner manufacturer for failing to co-operate with its investigations and taking too long to respond to inquiries.

The authority even accused Hoover of trying to justify a particular performance claim by referring to a Dyson-commissioned report which, in the course of another ASA investigation, Hoover had rubbished.

In all, seven complaints were upheld against Hoover, compared with two of Hoover’s complaints against Dyson.

The rulings will come as a severe blow to Hoover, which is preparing to defend itself in the High Court over claims that the design of its Vortex model infringed Dyson’s copyrights.

The case, which will begin next week, could result in the Vortex range being withdrawn from sale.

The Committee on Advertising Practice, which draws up ASA guidelines, is preparing a guidance note for the vacuum cleaner industry in an effort to cut down on time-consuming performance disputes.

Hoover plans to appeal against the ASA’s rulings. Marketing director Joe Grech says: “We believe the ASA itself could be guilty of misleading consumers. In some cases we have been ruled against because we were late with our submissions.”