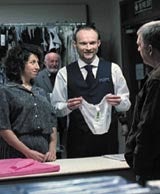 Littlewoods is being forced to redesign the cover of its catalogue in the run-up to the crucial Christmas period following a complaint from rival Argos.

The Advertising Standards Authority (ASA) ruled that the claim “Never beaten on price!” printed on the front cover and spine of the retailer’s autumn/winter 2001 catalogue was inaccurate because other retailers were cheaper.

The ASA ordered Littlewoods to change the claim on all current and future editions of the catalogue. The retailer says it will put stickers carrying a new strapline “low prices guaranteed” over the original claim on the catalogue and all point-of-purchase material, as well as its Christmas brochure in order to comply with the ASA ruling.

The watchdog also upheld seven complaints about press ads for Laing Homes which showed polaroids of scantily dressed women under the headline: “If they came back to your place, would they be impressed? If you’re always on the pull, then you need a pad to match.”

Each polaroid included a combination of either a woman’s name, telephone number or a mark out of ten. The ASA was particularly incensed that the company had ignored advice from the Committee of Advertising Practice (CAP) to remove the marks out of ten because they could be derogatory to women. It ruled that the ads were likely to cause serious and widespread offence.

WH Smith is launching a pre-Christmas television campaign starring Only Fools and Horses actor Nicholas Lyndhurst and other celebrities including author Jackie Collins and celebrity chef Delia Smith. The ads, which break on November 12, were created by Abbott Mead Vickers.BBDO. For the sixth year running, Lyndhurst will play all the characters of the Smith […]

Telewest hopes that a focus on broadband technology will attract customers, but can they be sold something few understand?

The potential of interactive TV has been slow to develop, but Kit Kat’s tie-up with a Hull broadcaster is a simple but vital step forward, says Torin Douglas