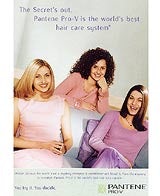 Unilever subsidiary Lever FabergÃ© has complained to the Advertising Standards Authority (ASA) about the use of P&G’s claim. The complaint has been upheld.

The ASA has also asked P&G to stop using the claim: “Based on protection against mechanical damage”, which appears as small print in the ad. Grey Worldwide London created the ads.

A P&G spokeswoman says: “This is a storm in a teacup about literal definitions and small print. The big picture is that Pantene is the haircare brand chosen by more people in the UK and worldwide than any other brand.”

Earlier this year, both packaged good giants were at odds about the use of almost identical straplines in TV campaigns for Pantene and Unilever’s newly launched Dove brand (MW March 21). At the time, P&G was believed to have demanded that Unilever either pull the Dove ads or change the strapline. Dove now uses a new tagline: “Beautiful hair… moisturised hair.”

Last year, the companies were in a legal wrangle over P&G’s alleged spying on Unilever’s US haircare operations (MW September 13, 2001).

Separately, the ASA has not upheld a complaint by GlaxoSmithKline (GSK) against rival Colgate-Palmolive about its claim for Colgate Total toothpaste that it is “The only toothpaste proven to work above and below the gumline.”