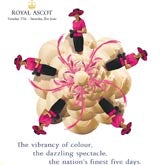 Ascot Racecourse has launched a six-figure ad campaign to drive visitor numbers at Royal Ascot and raise awareness that this year’s event will last five days instead of the usual four. The event was extended last year for the Golden Jubilee celebrations and Ascot has decided to make the change permanent. The campaign, breaking this week, includes press, outdoor and on-site activity and will be supported by direct marketing. Mercier Gray has created three executions for the campaign using images of five horses, five women, five champagne glasses to reinforce the message about the event’s additional day. The outdoor campaign will run at mainline railway stations and other key transport links in London and the South-east.