Clarke will lead Asda’s efforts to improve its food retailing business and broaden its non-food and e-commerce operations.

He takes on the role with immediate effect.

Bond stepped down from the role three weeks ago and will take on the part-time role of chairman from today (11 May).

He held senior management roles at Matalan and Iceland before returning to Asda in 2005 as retail director.

“I’m delighted to appoint Andy Clarke to be my successor,” said Andy Bond. “He was clearly the right choice from the internal and external candidates we considered. I’m looking forward to doing everything I can to ensure a smooth transition for Andy in his new role.”

President and CEO of Wal-Mart International, Doug McMillon says: “At Wal-Mart and at Asda, we have a robust succession planning and talent development process and Andy Clarke has long been identified as a leader. With his long career at Asda, working first as a store manager, followed by key roles in trading, as retail director and most recently as COO, Andy knows the company, our colleagues and he cares about our customers. He is the ideal person for the job and this will be a seamless leadership change.”

Last week, Asda launched its Price Guarantee, backed by a television and press advertising campaign, promising that the cost of a shopper’s basket will be lower than that of the same basket at their leading competitors and if it’s not, it will repay the difference.

The strategy has been blasted by rival Morrisons as a stunt.

Despite a slowdown in sales to just 2.5%, according to the latest Kantar supermarket share figures, Asda plans to become the market leader in general merchandise and the “clear number two” supermarket for food.

Last week Asda’s chief merchandise officer Darren Blackhurst also stepped down from his role. Asda is looking for internal and external candidates for the role. 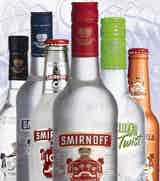 Experts and brand owners have hit out at a new survey of the world’s most powerful alcoholic drinks brands that forecasts “an end to premiumisation” in the sector.