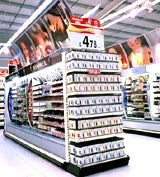 Asda is extending its cosmetics range to compete head on with Boots and Superdrug.

Asda will roll out its newly designed cosmetics departments nationally over the next couple of weeks. The new units, designed by Coutts Design, have been tested over the past year.

Asda has struck deals with established brands, including Maybelline and Rimmel, and new ranges such as Smackers, a cosmetics range aimed at teenagers.

A spokeswoman for the retail giant says the new display gives the cosmetic range an “upmarket, personal feel” and will be staffed by specially trained employees.

Cosmetics have traditionally been a weak area for supermarkets, mainly because the major brands were unhappy to sell their products in that environment.

In a situation similar to the spat between Levi’s and Tesco, major cosmetics brands felt their products did not receive the treatment they deserved on the supermarket floor.

Asda also announced this week that it is recruiting 10,000 staff – an average of 30 to 40 per store – so that it can put more employees on the shop floor.

Ads for the vacancies will appear in labelling on shelves, and stickers on own-branded products.