The brand “value” list – which measures the world’s top 50 retail brands and each brand’s ability to impact a company’s performance by looking at marketing investment and the goodwill the brand has built up with customers and staff – shows a steep 37% drop to £7.1bn for Tesco, which falls six places to 13th.

Morrisons, ranked 32nd, has seen its brand value drop by a quarter (25%) over the last 12 months, while 20th placed Sainsbury’s brand value has fallen 16%.

“Tesco, Sainsbury’s and Morrisons are all struggling as a result of the price war that has developed,” said David Haigh, CEO at Brand Finance. “Tesco will be hoping that this year’s 37% drop in brand value brings it to a low point from which it can now begin to recover.”

There could be a recovery on hand with Tesco the only one of the big four to achieve growth in the three months to 1 February, according to figures from Kantar Worldpanel. While Tesco’s growth was just 0.3%, it marked a strong turnaround from the previous month when its sales were falling by 1.2%.

“UK brands have been left counting the cost of the intense competition from the discounters engulfing the UK retail industry, with Tesco the worst performer and also a magnet for bad news,” added Haigh.

It wasn’t all bad news for British supermarket brands, however, with Asda registering modest growth of 2%. But Haigh feels the brand, despite Asda’s insistence that it is going nowhere, ‘may soon disappear’ after the recently announced integration of Walmart’s logo and ‘Save Money, Live Better’ slogan.

Asda posted a 2.6% fall in like-for-like sales in the 12 weeks to the beginning of January resulting in an overall decline of 1% in 2014 – its first drop in annual sales since 2008. Its fall in 2014, however, was a lot slower than its rivals after spending the majority of the year in minimal growth.

Topping off the four UK retailers featured on the list is M&S, which has seen its brand value fall 1%. 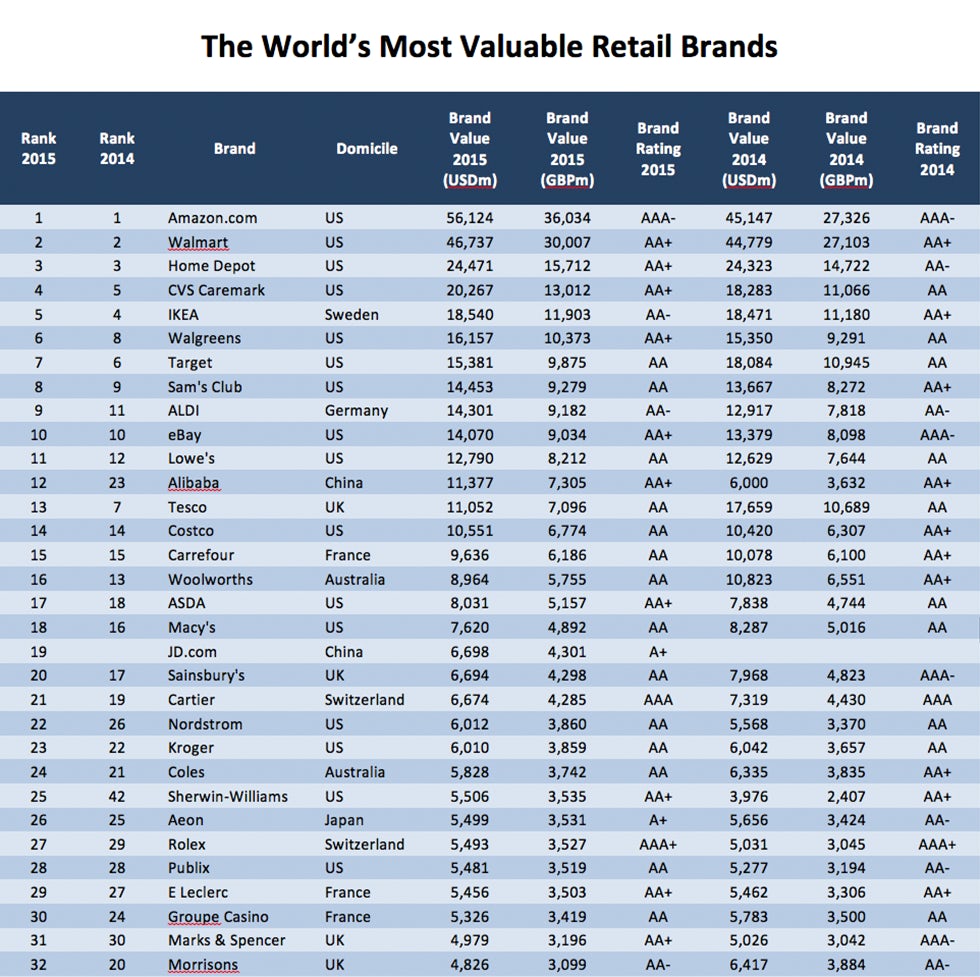 German retailer Aldi is one of the biggest climbers on after its brand value rose 11% to £9.2bn, making its brand more powerful than Tesco for the first time.

Lego, fuelled by the box office success of The Lego Movie, has overtaken Ferrari to become the world’s most powerful brand in 2015 as Apple holds its crown as the most valuable, according to the latest Brand Finance Global 500 report, for the year ending 1 January 2015.

Asda has revealed it will refresh its branding and change its slogan to closer replicate parent company Walmart’s as it posted a 2.6% fall in like-for-like sales for the 12 weeks to 4 January.

Despite seeing sales growth for the first time since January 2014, Tesco still has a lot of work to do to return to past glories and repair its damaged brand.