Asda’s chief executive Andy Clarke says the branding changes, which will be rolled out across Asda’s estate over the next two years, will ‘boost connectivity with Walmart.’

The big-four supermarket will adopt Walmart’s ‘Save Money, Live Better’ slogan while also taking up the US retail giant’s sunshine logo.

“Although there has been a number of opportunities for a refresh, we’ve not touched the brand since 2002 and we’ve now seen the opportunity to make changes to the way it looks, which is a natural fit as it will boost connectivity with Walmart,” said Clarke.

Over recent years, Asda has started to replicate more of Walmart’s business practices including its decision to utilise the US giant’s sourcing to become the first UK supermarket to embrace the in-store Black Friday sales phenomenon.

“Brands have to go through change, we are about to invest £600m across our estate,” added Clarke. “This isn’t about trying to bring in another type of customer or to change Asda, which is still very much a loved British brand, into Walmart. Quite simply, the timing just makes sense.”

In 2015, Asda will invest £600m into creating new stores and improving existing ones under the new branding. There will be 17 new store openings, including three London supermarkets, while 62 stores will undergo a major remodel.

At a press briefing today, Clarke also bemoaned the ‘damaging, unprofitable short term promotions’ that flooded the market in the fourth quarter and said the supermarket price wars, as well as Asda’s decision to discontinue vouchering schemes, both led to a fall in like-for-likes. Asda’s full year LFL sales for 2014 were also down, by 1% – the first time it has posted a drop in yearly sales since 2008.

Asda isn’t the only big four supermarket to have suffered a decline over Christmas with growth also averting Tesco, Sainsbury’s and Morrisons, with all the big-four losing sales to Aldi and Lidl.

“The retail market remains in one of the most challenging periods in its history but I’m confident our long-term strategy is a healthy one,” added Clarke.

“We’re continuing to lower the price gap to the discounters, which is now around 10% off Aldi and Lidl, and our connection to Walmart gives us a clear strategic advantage over our direct competitors for 2015.”

Shore Capital analyst Clive Black says Asda will be disappointed by the 2.6% fall in LFL sales for Q4.

“With both of its key competitors regrouping, Asda may find the going quite challenging in the year ahead too,” said Black.

“Asda is expected by us to continue to invest in price, it plans a £1bn of cuts to 2018, and to focus on driving out trade, including online and the fabulous George apparel brand; we believe that George could be a real winner in a number of BHS sites, as Primark is so effective on the high street.”

Marketing Week asked Clarke today if Asda would be interested in acquiring any BHS sites, with the high street retailer recently put up for sale by Sir Philip Green, for its successful George Home Brand.

However, he insisted Asda ‘isn’t connected’ to the sale and is instead focused on adding more George Home locations within its existing estate and building the recently launched homeware brand’s online presence.

Asda said George.com was the fastest growing online retailer by value in 2014. 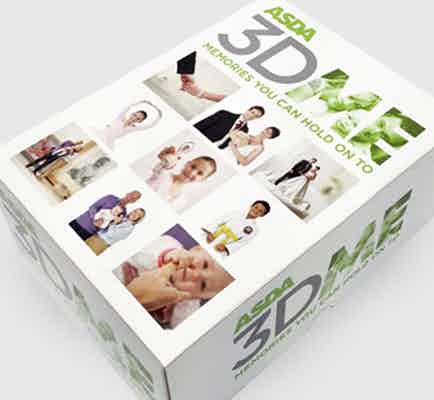 Asda’s in-store 3D printing service is taking shape after the branding and packaging was unveiled for the ASDA 3DME service, which allows customers to print miniature figurines of themselves.